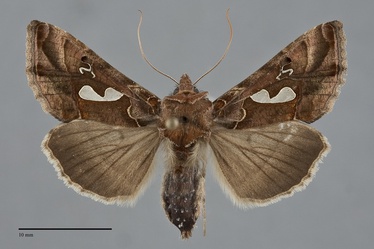 Megalographa biloba is a medium-sized (FW length 16 - 18 mm) brown moth that has been collected at widely disparate localities throughout the Northwest during most of the year. It has a distinctive silver "cat-eye"-shaped stigma on the central forewing. The forewing has a pointed apex and a flange at the anal angle. The ground color is warm brown, velvety on the median area with a slight gold sheen near the posterior postmedial line, and duller slightly purplish on the base, costa, and distal wing. The subterminal area has a brassy to green sheen depending on the angle of reflectance. A small gold spot is present at the anterior base medial to the basal line. The subterminal line is preceded by a black shade near the apex, a dark brown spot is present in the adjacent terminal area, and another black spot extends from the postmedial line into the fringe along vein M2. The large silver stigma on the central median area is an elongate oval with a V-shaped smooth anterior notch. The basal and antemedial lines are silver. The basal line is short and laterally convex on the costa. The antemedial line is angled toward the outer margin on the costa, interrupted by the cell, and oblique toward the base posterior to the cell. The postmedial line is sharply drawn toward the base, then smooth and very slightly excurved from below the costa to the trailing margin. The subterminal line is concave toward the base near the costa, then irregular and located near the postmedial line across the rest of the wing. The terminal line is pale purplish brown on the anterior two-thirds of the wing and a thin dark line on the posterior third. The fringe is purplish gray. The orbicular spot is absent. The reniform spot is a thin, squiggly silver mark and a black spot at the anterior distal cell. The hindwing is warm gray-brown, gradually darker gray toward the outer margin, with slightly darker veins and a thin terminal line. The hindwing fringe has a yellow base, median gray checkering, and a whitish gray edge. The head and thorax are brown, slightly reddish brown on collar and posterior thoracic tufts.

This species can be identified by its unique large bilobed silver stigma on the forewing. No other moth has this feature in our region.

Larva is smooth and has only two pairs of abdominal prolegs.  The color is green with a prominent white lateral stripe and fine white dorsal lines.  It is illustrated by Lafontaine & Poole (1991).

This species is migratory and is often encountered in open disturbed, agricultural, or urban habitats.  In the Pacific Northwest, it is probably not a permanent resident, but migrates northward in late summer. It has been found most commonly in large urban areas in the western part of the Northwest.

Based on a limited number of records, it appears that this species is found in the Willamette Valley and Puget Sound of western Oregon and Washington, respectively and separately in the eastern part of the Northwest in British Columbia and southern Idaho. It has not been encountered in eastern Washington or eastern Oregon.

This New World species has a very large range that includes most of South America except the far south and North America to southern Canada. North of Mexico it has been least commonly found in the northern Great Plains, the Great Basin, and the Pacific Northwest. It also occurs in Hawaii.

This species is a generalist feeding on a wide variety of herbaceous plants.

Adults are migratory and appear to fly for hundreds of miles.