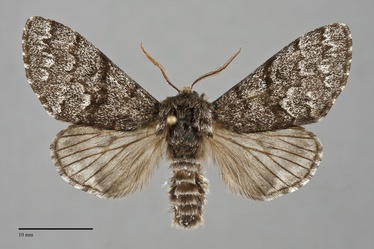 Panthea virginarius is a common large noctuid moth (FW length 20 - 24 mm in males; 24 - 28 mm in females) that flies in forests during the spring and summer. Although the ground color of this moth is a mixture of white and black scales, the pattern on its wings varies geographically: West of the Cascades, P. virginarius is white and powdery gray with black transverse lines. Further toward the east slope of the Cascades, it is a darker, more grizzled, gray with black transverse lines. The lighter western populations are darkest gray posterior to the cell, along the trailing margin in the median area, preceding the postmedial line, and at the outer margin. The antemedial, median, and postmedial lines are black. The antemedial line is uneven, usually zig-zag on the veins. The median line is thick and nearly straight to slightly uneven. The postmedial line is much more irregular, scalloped on the veins, and oriented straight across the wing from the costal margin to vein CuA1, then concave toward the base to the trailing margin without touching the median line. The white subterminal line is jagged. The fringe is checkered with white or light gray and black. The reniform spot is black, weakly kidney-shaped with a paler center or a black chevron. The orbicular spot is usually absent but is evident rarely as a small black dot or line. The hindwing is white in pale populations and pale gray to white in darker ones, with diffuse gray discal spot, a thinner and more faint postmedial line, a thick irregular submarginal band, a thin terminal line, and a checkered white and gray fringe. Specimens with heavily suffused hindwings usually have a pale white area at the margin of the wing. The head and thorax are white or gray and black, with the most prominent markings consisting of a black line at the tip of the collar and transverse barring across the distal tegulae. The male antenna is bipectinate. A few melanic specimens are olive brown with the normal black pattern.

The pale western populations of this species cannot be confused with any other moth. The populations of this species from east of the Cascade crest overlap with two similar dark powdery gray species. From southern British Columbia south they are sympatric with Panthea gigantea. The antemedial line of P. gigantea is straight, not uneven as in P. virginarius. Further north in central British Columbia it flies with Panthea acronyctoides to which it is similar in pattern and color. In general P. virginarius is slightly larger and has a paler hindwing, especially near the margin. Panthea acronyctoides is more likely to have a black orbicular spot. The genitalia of these species differ in both sexes as described and illustrated by Anweiler (2009). Olive-brown melanic specimens from the western part of the range can usually be identified by their similar size, shape, and black pattern of irregular transverse lines and limited forewing spots despite their unusual ground color.

The western pale populations and dark eastern populations were recognized as two species, Panthea portlandia and Panthea virginarius respectively, prior to the revision of the genus by Anweiler in 2009. He recommends against the use of subspecies because of a broad zone of transition between these forms. The name portlandia (Grote) is available for those who wish to recognize as a subspecies the populations from the west slope of the Cascade Mountains to the Pacific Coast.

Larva is black with small red scoli or tubercles covered with tufts of light brown hairs.  It is illustrated by Miller & Hammond (2003).

Panthea virginarius is found in forests throughout the Pacific Northwest. The northern limit of its range is in the Peace River District in British Columbia. It occurs on Haida Gwai (Queen Charlotte Islands). It is absent from the driest interior parts of our region and has not been found in the isolated ranges in the Basin and Range Province.

This species occurs in western Alberta and south to western Wyoming and central Utah in the Rocky Mountains. Isolated records from the Cypress Hills on the southern Alberta-Saskatchewan border are shown in Anweiler (2009). The range extends south to the Transverse Ranges in southern California along the Pacific Coast.

Panthea virginarius has a long flight season and has been collected from early April to mid-September in the Pacific Northwest. Most records are from mid-May through August, with a peak in June and July. It is nocturnal and comes readily to lights.