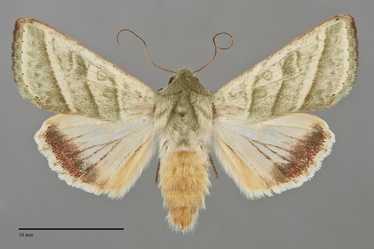 Chloridea virescens is a distinctive, small to medium-sized moth (FW length 13 - 14 mm) that is an introduced pest of greenhouses and other agricultural areas in our region. It has a light green forewing with straight dark and pale transverse lines. The forewing is triangular and light green in color. The markings are dominated by nearly parallel straight antemedial, median, and postmedial lines, all pale medially and dark laterally. The round orbicular spot and hourglass-shaped reniform spots are green, very faint. The pale subterminal line is preceded by faint green spots or wedges. The hindwing is pearly white to light yellow-tan with a light to dark gray marginal band and a white fringe. The head and thorax are light gray-green. The male antenna is filiform.

This species can be identified by its green color and pattern of parallel light and dark lines. The most similar species in our region is Zotheca tranquilla, a light green species in the tribe Xylenini of the subfamily Noctuinae, but it lacks the distinctive forewing lines of C. virescens and has an entirely white hindwing.

This species is common to abundant in disturbed agricultural habitats throughout the southern United States, and migrates northward during the summer.  It is a major agricultural pest on many crops.  Most records from the Pacific Northwest appear to be from larvae imported on cultivated nursery plants such as geraniums in urban areas.  The species is not an established resident of the Pacific Northwest because of cold, freezing temperatures during the winter.

Chloridea virescens occurs sporadically in agricultural areas in southwestern British Columbia, western Washington, and western Oregon. It has also been found in the Yakima Valley in south-central Washington.

Chloridea virescens is widespread in the New World where it occurs in South America as well as in North America. This species is common in the southern half of the continental United States. It migrates northward to southern Canada.

This species is a generalist feeding on many kinds of herbaceous plants, and may particularly prefer nightshades (Solanaceae) and mallows (Malvaceae).

No specific flight period can be stated since this species is a pest and can reproduce in a greenhouse environment. It is normally a nocturnal species that comes to lights.

This species is a major agricultural pest on many crops across the southern United States, and is particularly destructive to cotton crops.