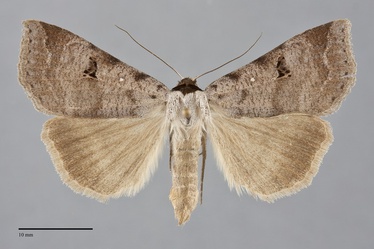 Lygephila victoria is a medium-sized gray moth (FW length 21–23 mm) with broad triangular wings and a velvety dark brown head and thoracic collar. The forewing ground color is blue gray, finely streaked and speckled with gray and brown. The distal area of the forewing is shaded with warm slightly reddish brown to dark brown, darkest near the costa between the postmedial and subterminal lines. The lines are faint except for broad origins at the costa that form a series of three spots. The reniform spot is moderately large with the posterior portion drawn toward the wing base along the cubital vein. It is variable in shape and color, sometimes very faint, but usually broken brown, ochre, or black or a combination of colors. Dark individuals have the entire wing suffused with dark brown. The hindwing is yellowish gray with a darker gray marginal area. The head and collar are smooth dark brown, a white line across the frons runs between the bases of the antennae. The remainder of the thorax is gray. Both males and females have simple filiform antennae.

This species can be recognized by the combination of broad blue-gray and brown forewings and dark brown head and thoracic collar. Several species of Noctuid moths have similar dark collars, but differ greatly in other respects of color and pattern (see Protolampra rufipectus, Agnorisma bugrai, and Adelphagrotis carissima).

This species is widely distributed in mountain or forest habitats throughout much of western North America, and is common in moist forest habitats throughout the Pacific Northwest.  This includes coastal rainforests and mixed hardwood forests west of the Cascades, mixed hardwood-conifer forests in the high Cascades, and mixed conifer or ponderosa pine forests east of the Cascades.

Lygephila victoria is widely distributed in forests throughout the Pacific Northwest at least as far north as south-central British Columbia. It is found on both sides of the Cascade Mountains. East of the mountains it is found in southern British Columbia and northern Washington, northern Idaho, and the Blue Mountains. It has not been collected in southeastern Oregon or southern Idaho.

This species occurs in western North America. It is distributed southward from our region to southern California, Arizona, and west Texas.

This species may be a foodplant specialist feeding on snowberry (Symphoricarpos spp.) in the Caprifoliaceae according to Powell and Opler (2009), but J.C. Miller reared larvae in the laboratory on lupines (Lupinus spp.) in the Fabaceae.

Adults are found during the summer, with most records in our region from late June until late August. It is nocturnal and comes to lights.