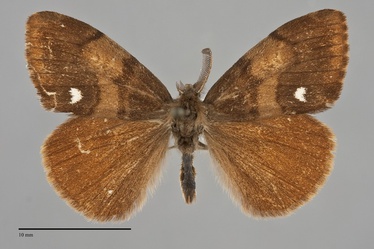 Orgyia antiqua is a small, rusty-brown moth with day-flying males found in late summer and fall. Females of all Orgyia species have a very large fuzzy body and are wingless. Males have broad forewings, a small slender body, and broad pectinate antennae. The forewing length is 15–16 mm with an approximate wingspan of 3 cm. The forewings are red-brown to orange-brown, lightest in the median area. The wavy broad antemedial and postmedian lines are slightly darker than the adjoining areas. A half-moon shaped white subanal spot near the postmedian area is the most prominent marking. The hindwings are solid red-brown to orange-brown. The eyes are reduced in size, appearing as large as a quarter of a circle when viewed from above.

Males of this species can be identified by their red-brown wings with a white subanal crescent. It is our only diurnal Orgyia species and has reduced eye size. Orgyia pseudotsugata has red-brown hindwings, but its forewings are darker gray brown than those of O. antiqua and have a large light reniform spot that O. antiqua lacks. The females can be told from our other Orgyia species by their antennae, the branches being at least twice as long as the shaft diameter. Those of other species are less broadly bipectinate.

This species is common and widely distributed throughout much of North America in both hardwood and conifer forests.  In the Pacific Northwest, it is particularly common west of the Cascades in coastal rainforests of Sitka spruce, in montane coniferous forests at higher elevations, in oak woodlands, and in mixed hardwood forests at low elevations.

Orgyia antiqua is found in forests throughout our region and has been most commonly collected in western Oregon and Washington. It is very uncommon in steppe habitats.

This species has a Holarctic distribution and can be found across North America and Eurasia (including Iceland). The North American populations occur south to the Middle Atlantic States and northern California.

This species is a broad generalist feeding on a wide variety of both hardwoods and conifers such as oaks (Quercus spp.), willows (Salix spp.), cottonwoods (Populus spp.), huckleberries (Vaccinium spp.), Douglas fir (Pseudotsuga menziesii), and Sitka spruce (Picea sitchensis).  The larvae disperse by ballooning since the females are flightless. The eggs are laid en masse on the coccoon of the female and are uncovered by scales or foam unlike our other Orgyia species. The egg overwinters.

This species is diurnal. Adults are found from July to early October. The males appear red on the wing and have a characteristic rapid fluttering and bouncing flight.