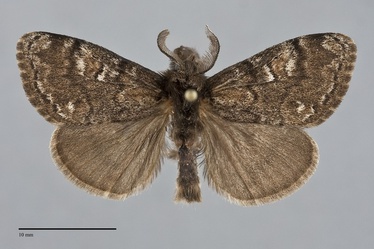 Dasychira species are gray, rounded-wing moths that can be identified by their bipectinate antennae and tufts of raised metallic scales on the posterior thorax and proximal abdominal segments. Dasychira plagiata is a predominantly eastern North American species that might occur in eastern British Columbia. It is a medium-sized moth (FW length 15–20 mm) that resembles a brown form of either of our other two Dasychira species. Dasychira plagiata has dark brown and gray forewings with limited pale markings around the reniform spots and a white subanal spot.

This species is closest in appearance to Dasychira grisefacta grisefacta, and Ferguson (1978) notes that they have been frequently confused in the past. Dasychira plagiata has a smoother and browner forewing.

No information is presently available for this species in the Pacific Northwest.

This predominantly eastern North American species might occur in eastern British Columbia. Ferguson (1978) indicates that the range likely extends to Alberta, but notes that the exact limits are uncertain due to confusion with Dasychira grisefacta. Dasychira plagiata was recorded from Windermere, British Columbia in Jones (1951). It should be sought in the Peace River and Rocky Mountain Trench regions of the province.

Dasychira plagiata is a species of boreal eastern North America. It occurs from Labrador at least as far west as Alberta. The southern limit of its range is Massachusetts, central New York, and northern Michigan except in the Appalachian Mountains where it reaches North Carolina.

The adults do not feed. They are nocturnal and both sexes come to light. Eastern populations fly in summer, mostly during July.