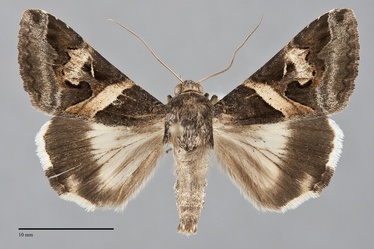 Melipotis indomita is a rare migrant that has only been found once along the Oregon Coast in the Pacific Northwest. It is medium to large (FW length 19 - 22 mm). It is sexually dimorphic. The male forewing ground color is somewhat variable, usually dark brownish gray with a blue gray terminal area. A prominent, pale, brownish white-mark borders the oblique antemedial line and extends slightly beyond the thin median line. The postmedial line balloons laterally near the black reniform spot and this portion of the line is also filled with brownish white. A black bar is present in the cell proximal to the reniform spot, and a small black spot is present at the apex. The hindwing is brownish off-white, with a broad dark gray marginal band that is interrupted by white near the cubital vein. The hindwing fringe is pure white with a black segment midway between the anterior margin and the anal angle. The female is similar but the base of the wing is gray followed by rusty brown. The head and thorax of both sexes are gray. The antenna is simple, ciliate in males.

This rare migrant can be recognized by the sharply defined oblique mark with straight borders across the forewing in association with a black and brownish off-white hindwing.

This species is common and widely distributed across the southern United States and northern Mexico.  It only occurs in the Pacific Northwest as a long-distance stray, and no permanent populations are present.

The single collection record for this species in our area is from the southern Oregon Coast.

Melipotis indomita is found in the southern United States and Mexico. In the United States it occurs from California, Utah, and Arizona east to Florida.

This species is a foodplant specialist feeding on woody shrubs and trees of the legume family (Fabaceae).

Adults occur from May to October in California. The single Oregon record is from mid May.