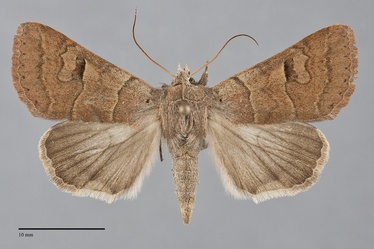 Cissusa indiscreta is a tan, spring-flying moth usually found in association with oaks. It is medium-sized (FW length 18 - 20 mm) with broad wings typical for the tribe Melipotini. The forewing ground color is variable, usually an orange or gray shade of tan but occasionally darker brown. All ordinary lines are present. The postmedial line has a ballooning convex portion near the reniform spot; the other lines are straighter. The reniform spot is rectangular with a slight lateral concave margin. Its medial portion is ochre contrasting with darker filling, usually black near the ochre but occasionally all black or dark tan. Some individuals have black spots along the anterior portion of the subterminal line. The hindwing is light gray tan with darker gray discal spot, veins, and marginal area. The head and thorax color matches the forewings. The simple antennae are ciliate in males.

This species can be identified from other spring-flying moths by its tan color, outwardly ballooning postmedial line near the reniform spot, and quadrate reniform spot with medial yellowish-against-dark pattern. Spring-flying light brown Orthosia species have lighter hindwings and lack the lateral convex portion of the postmedial line near the reniform that C. indiscreta has. They also differ structurally, including in having trifid rather than quadrifid hindwing veination (see glossary) an hairy eyes.

Larva is smooth, mottled gray and black with pale dorsal and subdorsal lines. It is illustrated by Miller & Hammond (2003).

This species is found throughout most of western Oregon. In Washington it is found near the Columbia River in association with oak, extending north east of the Cascades as far as Yakima County. An apparently disjunct population is found near the Gulf of Georgia in southwestern British Columbia, the San Juan Islands, and Whatcom County Washington.

This species is found along the Pacific Coast to southern California, and in the southwest in Arizona to central Colorado.

This species is a foodplant specialist feeding on oaks (Quercus spp.) in the Fagaceae, and primarily feeds on Oregon white oak (Q. garryana) in the Pacific Northwest.

Cissusa indiscreta is single brooded with a spring flight. Adults have been found from early March until mid May in our region. It is nocturnal and comes to lights.