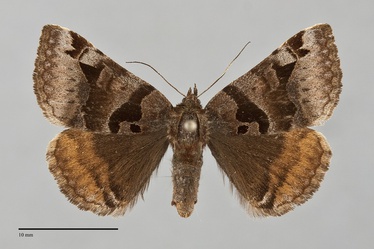 Euclidia ardita is a small to moderate-sized (FW length 13 - 15 mm) dark brown moth that flies during the day in the spring. The forewings are triangular in shape with a deep brown ground color, violet-tinted where lighter distal to the postmedial line. The dominant markings are dark velvety brown. These include the broad antemedial line and an adjacent spot near the posterior margin, a triangular spot distal to the reniform spot, and a dark mark preceding the subterminal line near the apex. The median line is a broad dark brown shade. The orbicular spot is a small dot and the reniform spot is large but faint. The hindwings are dark coppery brown with dark brown suffusion medial to the postmedial line and a similar submarginal line. The area between the lines is lighter at the anal angle. The body is dark brown. The antennae are simple in both sexes. The eyes are slightly reduced in size.

The nearly identical species Euclidia cuspidea barely enters British Columbia in the northeast. The outer edge of the dark brown antemedial line of E. ardita is straight or slightly concave at its midportion, while that of E. cuspidea is evenly outwardly convex. Euclidia ardita tends to be smaller and darker than E. cuspidea, and its eyes are slightly smaller in size.

This species is moderately common in moist forest and meadow habitats throughout the Pacific Northwest, and is usually found at middle elevations in the Cascades and Rocky Mountains.

Euclidia ardita is found in the southern portion of British Columbia and adjacent northern Idaho and northeastern Washington. Further south is is found around the margin of the Columbia Basin and in the Blue Mountains of Oregon. It occurs west of the Cascade Mountains but has a spotty distribution in this area as far north as Vancouver, British Columbai.

Euclidia ardita is a West Coast species. Outside of the Pacific Northwest this species ranges south through California.

Euclidia ardita flies in the spring and early summer and is strictly diurnal. Pacific Northwest records are from late April to early July.