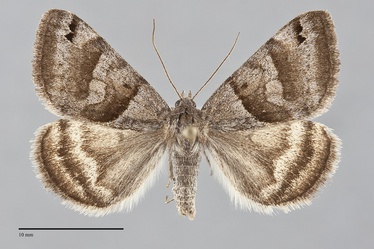 Caenurgina crassiuscula is similar to Caenurgina erechtea, but has a more restricted range in the northern portion of our region. It is a slightly smaller and paler moth in our area (FW length 15 -18 mm) and it is also is less sexually dimorphic. As in C. erechtea, looping markings on the forewing are formed by the partially fused antemedial, median, and postmedial lines and reniform spot and the fields encompassed by these lines are dark gray, forming two dark marks across the central forewing area. The ground color of males is light blue-gray, darker brownish gray in females, with a darker gray terminal area. The orbicular spot is a dark dot. Partially fused black spots precede the subterminal line near the apex. The hindwings are light grayish yellow in males, slightly darker in females. Those of both sexes lack discal spots but are suffused with gray scales and banded with gray postmedial, submarginal, and terminal lines. The ventral wings are pale yellow with a dusting of gray scales and lack significant transverse banding. The head and thorax are gray. The antenna is ciliate in males and simple in females.

This species and C. erechtea are closely similar in eastern North America. In the Pacific Northwest C. crassiuscula is smaller and paler bluish-gray, and the dark areas on the forewing tend to be less constrastingly dark than in C. erechtea. They are most reliably distinguished from C. erechtea by examining the structure of the male genitalia. This can be done after brushing the scales from the distal valves with a brush and viewing under moderate magnification. The valve of C. crassiuscula is small and bluntly rounded, while that of C. erechtea is larger and has a dorsal spine-like extension. In practice, only specimens in the northern and eastern parts of the Pacific Northwest need to be closely examined since C. crassiuscula is restricted to this portion of our area.

Caenurgina distincta, previously considered to be a northern and montane species, is now a synonym of C. crassiuscula.

This species is common to abundant in open fields and meadow habitats across much of North America.  In the Pacific Northwest, it is more restricted to meadow habitats in the northern Rocky Mountain region.

Caenurgina crassiuscula is found in the northern portion of the Pacific Northwest. It has been collected as far south as the northeastern tier of counties in Washington. It might also occur in the mountains of Idaho and western Montana.

This species is widespread in North America. It is found throughout most of the East. It occurs in the mountains at least from Colorado to Yukon Territory.

This species is a foodplant specialist feeding on herbaceous legumes (Fabaceae).

The adults fly in the summer months and have been collected from May through July in our area. They are both diurnal and nocturnal, and come to light.