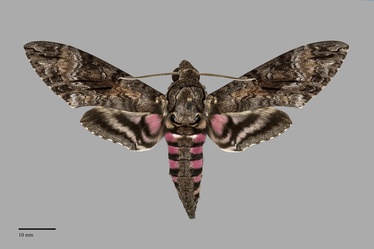 Agrias cingulata is a very large moth (FW length 40–58 mm; wingspan 95–120 mm) that is a very rare stray from the south in our area. The bright pink spots on the body clearly distinguish this species from other sphinx moths in the region. The forewings are long, narrow, pointed, and have a slight sickle-shape. They are strongly mottled gray and brown, darkest in the median area and near the outer margin. Two long, black dashes are present in the median area posterior to the discal spot and several more are located on the distal forewing. The antemedial and postmedial lines are black, double. The antemedial line is convex lateral on the anterior wing. The postmedial line is biconcave with curved segments on the anterior and posterior half of the forewing. The subterminal line is black, irregular and incomplete. The discal spot is relatively small, outlined in black and filled with pale gray or white. The hindwing has a psychedelic pattern of curved and wavy black bands on a bright fuschia pink base and powdery gray margin. The head and thorax are powdery brown and gray. The abdomen is robust, taperering posteriorly, with bright pink and black bands on each segment and gray and brown dorsal stripe. The eyes are very large and the antenna is white, club-like.

This is the only North American Hawk Moth with pink bands on the abdomen and pink-striped wings. It cannot be confused with any other species in our area.

The larvae are all stout with a horn at the end of the abdomen and a pair of prominent stripes on the face, but there are a few different color forms. One form has a pale tan background heavily stippled in dark brown, dorsolateral stripes and highlighted spiracles. The other two forms are greenish and appear very smooth with seven pairs of dorsolateral stripes and prominently marked spiracles. One of these forms has brown spiracles surrounded by black and highlighted in white, the other has a paler background and only has faint markings. The brown form is often a 4th or 5th instar of one of the green forms but not all green forms will end up brown.

This species is known to occur in open lowlands of tropical and subtropical areas of southern North America, particularly in more disturbed agricultural areas.  Its occurrence in the north is as a rare vagrant.

Agrius cingulata has no known breeding populations in the Pacific Northwest. Individuals of this species migrate northward each summer, although there are relatively few records from north of southern California and Arizona in the West. The only known Pacific Northwest record is from southeastern British Columbia.

Agrias cingulata is primarily distributed in South America, Central America, the Caribbean, and Mexico, but also occurs in Florida, Texas, and Arizona. Numerous individuals stray northward during the summer. There is some ambiguity where the North American cutoff point for breeding populations exists, but it seems likely there are some breeding populations as far north as Arkansas and southern Missouri. Stray individuals have been recorded to Canada in the East.

This species is a foodplant specialist feeding on the plant family Convolvulaceae with a preference for plants in the genus Ipomoea, in particular the Sweet Potato (Ipomoea batatas). Eggs are laid singly on the leaves of a host plant and hatched larvae are solitary feeders on the bottom of host leaves both during the day and at night. Pupation occurs in an underground chamber. Pupae are distinctly differentiated by their free proboscis that is curved back on itself.

Adults are nocturnal and feed on nectar from a variety of deep-throated flowers including moonflower (Calonyction aculeatum), morning glory (Convolvulus spp.), and petunia (Petunia spp.). Both males and females are strongly attracted to light. The adults are strong feeders and will often travel long distances during the summer months. Most records show the adults are active from May-November but in southern regions they may be active all year around. Similarly the number of generations can vary with the length of the season/environment. There are records of the species being having two generations with a flight in April and another in October-November. Further north only a single generation may occur in a year with pupae potentially overwintering.

This species is occasionally reported as a pest on Sweet Potato (Ipomoea batatas).