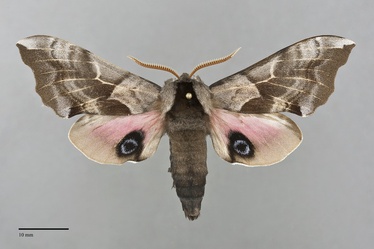 Smerinthus ophthalmica is one of the most common and widespread moths in the Pacific Northwest.  It is a large sphinx moth (FW length 34–47 mm) with pink hindwings with a blue eyespot with a central black pupil. The forewing has a smoothly scalloped outer margin. Its ground color is variable, most commonly light gray and darker gray-brown, but tan and dark brown individuals are fairly common in most populations. The forewing is marked with a complex pattern of light and dark brown. It is pale from the forewing base to the end of the cell anterior to the cubital vein and to the outer component of the antemedial line posterior to this vein, as well as across the distal forewing near the postmedial line and at the apex. The median area is darker gray to brown-gray, as is the outer margin below the apex. A small triangular black spot is present at the distal posterior margin. The cubital vein and its branches and the transverse vein across the distal cell are partially whitish, fading to the ground color by the outer margin. The lateral aspect of the antemedial line is bent sharply 90° on the mid-wing below CuA2 with the apex pointed toward the margin. The postmedial line has many components which are smoothly undulating. The hindwing is mostly rose pink to red with tan outer and light gray anterior and medial margins. It is marked with a prominent eyespot, black at the periphery, bright blue with a large black pupil centrally. The sides of the thorax are light gray and the central portion is dark gray-brown. The antenna is thick, tapering slightly from apex to base.

This species and its close relative Smerinthus cerisyi can be distinguished from other Pacific Northwest sphinx moths with hindwing eyespots by the solid round black pupil in the blue portion of the "eye." The central of eyespots of other similar species are either double (Smerinthus jamaicensis) or pale (Paonias species). Smerinthus cerisyi, found in central and eastern British Columbia in our region, is quite similar to S. ophthalmica. Compared to it, males of S. ophthalmica have narrower antennal pectinations, smoother forewing outer margin, more sharply angled antemedial line, smoother postmedial line, less contrasting paler veins, and a less conspicuous subterminal line. As a result S. ophthalmica appears smoother. Brown morphs do not exist in S. cerisyi. Females of these two species cannot be reliably distinguish without DNA sequencing and are best identified when associated with the males.

The most cogent argument for recognizing this species as distinct from the more eastern S. cerisyi was recently put forth by Schmidt & Anweiler (2010), although they note that they were not the first to make this assertion. Their argument is based on observations across a broad zone of contact of these moths in Alberta, noting consistent differences in the superficial appearances of the moths, the presence of brown forms in S. ophthalmica but not in S. cerisyi, slight structural differences in the wing margins and antennae, and a 3.5% difference in the sequence of the cox1 gene of their mitochondrial DNA.

The larva is granulose green with yellow subdorsal lines and yellow lateral stripes, a short caudal horn.  It is illustrated by Miller & Hammond (2003) under the name Smerinthus cerisyi.

This species is common to abundant in all forest and riparian habitats throughout the Pacific Northwest.  These habitats include urban areas, coastal rainforests, lowland mixed hardwood forests, high elevation conifer forests, quaking aspen forests in the Rocky Mountain region, and along creeks and rivers at low-elevation desert riparian zones east of the Cascades.

Smerinthus ophthalmica is found at low to mid elevations throughout our region, including along the Pacific Coast and in dry steppe regions as long as there is enough moisture for willows to grow.  The northern limits of this moth in central and northern British Columbia are still being defined due to confusion of this species and S. cerisyi; however, it is known to occur the southern part of the province.

Smerinthus ophthalmica is a species of the American West.  It occurs from southern British Columbia and southern Alberta south to near the border with Mexico.  It is replaced by S. cerisyi to the east and north, and Smerinthus saleceti in the southern-most Rocky Mountains and southern Arizona.

Smerinthus opthalmica is single brooded and has been found from April through August.  They are nocturnal and come to light.  This species is common at porch lights.  The mouthparts are reduced and the moths do not feed as adults.