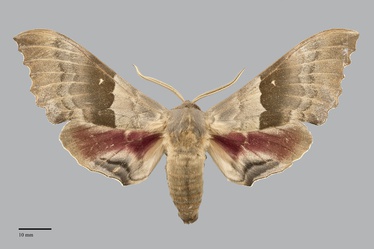 This species can be identified by its massive size, olive color, and wine-red hindwing with parallel black marks at the anal angle. It is only likely to be confused with Pachysphinx modesta where the ranges of these species approach each other in the northern Columbia Basin and near the Rocky Mountains. The most consistent difference between them is the shape and relative strength of the hindwing black marks. The anterior mark of P. modesta is darker than the posterior mark and has a triangular shape, unlike the two similar marks of P. occidentalis. The larvae of these species are also different in several respects (Hodges 1971; Tuttle 2007).

The genus Pachysphinx is in need of revision (Schmidt BC, personal communication). However, it is unlikely that the Pachysphinx populations in our area will be split into more than two species.

The larva is granulose green with white lateral stripes and a short caudal horn in the last instar.  It is illustrated by Miller & Hammond (2003).

This species is widely distributed in the Pacific Northwest east of the Cascades, but is very narrowly restricted to riparian or urban habitats along creeks or rivers in low elevation desert regions.

This species is found in dry interior portions of the Pacific Northwest as far north as central Washington.  Its range extends east through southeastern Oregon and southern Idaho to the Rocky Mountains.

Pachysphinx occidentalis, as the species name suggests ("occidentalis" means "western"), is a species of the American West.  It occurs west of a line from west Texas and eastern Colorado to southwestern Saskatchewan.  Its distribution near the Pacific Coast extends from the Mexico border to central Washington.

This species is a foodplant specialist feeding on Salicaceae including both willows (Salix spp.) and cottonwoods (Populus spp.), but appears to particularly favor cottonwoods.

Adults are single brooded in the Pacific Northwest and fly in the summer from May to early August, most commonly during June and July.  They are nocturnal and come to light.  They do not feed as adults.