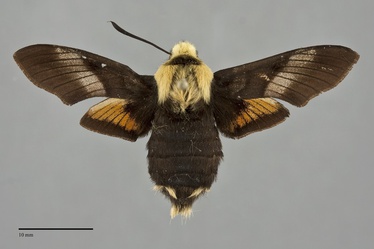 Proserpinus flavofasciata is an uncommonly collected day-flying bumblebee mimic without clear wings. It is a large moth but is small for a sphinx moth (FW length 21 mm). The forewings are blackish gray with a lighter gray subterminal area traversed by black veins. The hindwings are dark yellow with black basal area, veins, and narrow marginal band. The head and thorax are "bumblebee" yellow with a black collar, while the abdomen is mostly black with a small amount of yellow near the tip. The antenna is black, club-shaped.

This species cannot be confused with any other moth in our region.  Other bumblebee-like sphinx moths in the genus Hemaris have clear wings with dark veins, very different from those of P. flavofasciata.

This is a boreal, subarctic, and montane species that is widespread in open forests of Alaska and Canada, and extends southward in the Cascades and Rocky Mountain region where it mostly occupies subalpine meadows.  It is usually uncommon to rare, but may become more common following a forest fire.  This species is considered to be management sensitive, and benefits from thinning, clear-cutting, and burning that maintains disturbed openings and meadows in the forest.

Proserpinus flavofasciata is found in mountain forests throughout our region except in the Blue Mountains and the isolated ranges in the Basin and Range province.  Specimens databased for this project extend to southern British Columbia, but the true range in the province is likely to be much more extensive since the range is known to include Alaska.

This species occurs in boreal and montane forests across the width of North America.  It is most widely distributed in the West where it is found from central Alaska to northern California and northern Colorado.  Eastern populations occur from Hudson Bay to the northern Great Lakes in the mid-Continent and from the mouth of the St. Lawrence River to central New England near the Atlantic Coast.

This species is a foodplant specialist feeding on fireweed (Epilobium spp.) in the Onagraceae.

Adult moths fly in early spring, sometimes when snow banks are still present, and nectar on flowering currents (Ribes spp.) or other spring flowers in high mountain areas.  Records in our region are from late April to early June. The moths are diurnal and mimic bumblebees (Bombus spp.) in appearance and behavior.