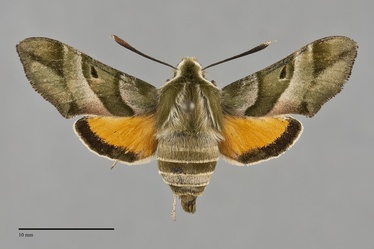 Proserpinus clarkiae is an attractive, small to medium-sized (FW length 17–18 mm), olive-green and yellow, day-flying sphinx moth. The forewings are relatively short and stubby for a sphinx moth, with a convex outer margin and a sharp anal angle. They are dull to bright olive-green, interrupted by light gray or pale green in the antemedial and subterminal areas. The transverse lines separating these areas are smoothly excurved. The discal spot is nearly black with a pale halo. The hindwing is bright yellow with an even black marginal band and white fringe. The entire body is similar green, with light edges on the head, collar, tegulae, and abdominal segments. The antenna is club-like.

This species can be identified definitively by the combination of green forewing and yellow hindwing. No other moth shares these features in our area, although similar species of Proserpinus are found elsewhere in North America.

The synonym Lepisesia victoria Grote was described from British Columbia.

The larva is pink with black lateral dashes and no caudal horn. It is illustrated by Powell & Opler (2009).

This species is fairly common in open grassland habitats including native prairies in the Willamette Valley and southwestern Oregon, in high mountain meadows of the Cascades and Rocky Mountain regions, and in sage steppe and open forest in foothills.  It is considered to be management sensitive, and benefits from burning that maintains open prairies and meadows against tree invasion.

Proserpinus clarkiae is found from southern British Columbia to the western California-Oregon border. The range extends to southeastern British Columbia, east-central Idaho, and southern Oregon. These are at the limits of its northern range as shown in Tuttle (2007). This moth occurs west of the Cascade Mountains, more commonly in Oregon than in Washington.

The range of this species extends south through western Nevada and California to the vicinity of Los Angeles.

The larva of P. clarkiae is a foodplant specialist that feeds on members of the evening primrose family Onagraceae, including species of Clarkia and Oenothera.

Adults are diurnal and visit flowers, including flowering currants (Ribes spp.). They typically occur from spring to early summer, with most records in May and early June.