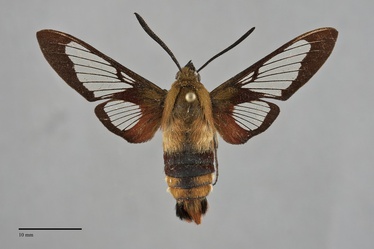 Hemaris thysbe is a large moth (FW length 20–24 mm) with clear wings with warm dark brown veins and borders. The forewing cell contains a row of scales that looks like a longitudinal vein. The head and thorax are variable yellowish olive to tan. The abdomen is similarly colored, with a two-segment wide dark warm chestnut brown band and distal tufting. The ventral abdomen is uniformly dark. The dorsal legs are red-brown. The black antenna is club-like.

This species is common and widely distributed in eastern North America, but is very rare and sporadic in western North America.  It flies in meadows and open forest.  The populations in the Willamette Valley might have been associated with prairies.

Hemaris thysbe has an unusual distribution in the Pacific Northwest.  It is most widely distributed in central and northeastern British Columbia, especially in the far north, but has also been recorded from the lower Fraser Valley.  A disjunct southern population is found in the Columbia Gorge and Oregon's Willamette Valley.

Hemaris thysbe is widely distributed in eastern North America to the western Great Plains.  In the north it is found from southern Labrador to central Alaska to near the limit of trees.  It does not occur south of the Pacific Northwest in the West.

This species is a foodplant specialist feeding on Caprifoliaceae such as honeysuckle (Lonicera spp.) and snowberry (Symphoricarpos spp.).

Adults are diurnal and appear to be bumblebee mimics.  They hover in front of flowers while nectaring.  The records from our area are from mid-May to late July.