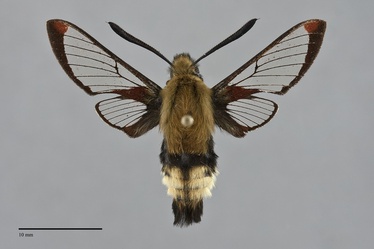 Hemaris thetis is a medium-sized, day-flying sphinx moth (FW length 17 mm) with clear wings that resembles a bumblebee. The forewings are long and very narrow for the size of the moth and the hindwings are quite small. The wing margins and veins are blackish gray with red-brown areas at the bases of both fore- and hindwings and a red spot at the apex of the forewing; the rest of the wings are clear. The head is olive dorsally, light yellow ventrally, with a black band across the frons. The thorax and anterior abdomen are yellowish medium olive, while the rest of the abdomen is banded black and light yellow. The pattern of black and yellow on the abdomen is the diagnostic feature between this moth and Hemaris diffinis and is discussed further below. The antenna is club-like, tapering gradually from tip to base typical of all sphinx moths.

This species is easily identified as a member of the genus Hemaris by its clear wings and bumblebee-like appearance. It is the most common and widespread member of the genus in the Pacific Northwest. Hemaris thysbe is a larger species that flies in southwestern Washington and the Willamette Valley of Oregon. The forewing cell in H. thysbe is divided into anterior and posterior portions by a vein-like longitudinal line, undivided in H. thetis. Hemaris diffinis, a predominantly eastern North American species that reaches its western range limit in northeastern British Columbia, is closely similar to H. thetis. According to Schmidt (2009), these species differ consistently in three traits: 1) the anal tuft of scales is solid black or black with some dorsal yellow hairs in H. thetis, not solid yellow centrally as in H. diffinis; 2) the dorsal thorax and basal abdominal segments are even olive in H. thetis, orange-yellow with pale yelllow subdorsal hairs that produce a striped appearance in H. diffinis; and 3) the subdorsal yellow strip does not extend through the fourth abdominal segment in H. thetis but extends through this segment in H. diffinis.

Hemaris thetis was known as Hemaris senta for many years and its relationship to the eastern species Hemaris diffinis was muddled at best. Chris Schmidt (2009) clarified the mystery and showed that H. thetis replaced H. diffinis in most of the West with an area of overlap in Alberta.

The larva is blue-green with faint markings and a caudal horn.  It is illustrated by Powell & Opler (2009) under the name Hemaris diffinis.

This species is widely distributed throughout the Pacific Northwest in open mixed hardwood and conifer forests, oak woodlands, brushlands, and along riparian corridors of creeks and rivers east of the Cascades.  It is usually rather uncommon in most habitats but can be locally frequent.

Hemaris thetis is widely distributed throughout low to subalpine habitats in our region to west-central British Columbia.  It is not found in dry steppe, and appears to be limited to relatively dry open habitats west of the Cascade Mountains.

Hemaris thetis occurs throughout North America from the Rocky Mountains to the Pacific Coast.  It has been found as far north as southern Northwest Territory and the Alaska Panhandle.

This species is a foodplant specialist feeding on Caprifoliaceae such as honeysuckle (Lonicera spp.) and snowberry (Symphoricarpos spp.).

Adults fly during the day and are bumblebee mimics.  They nectar and hover in front of flowers while feeding, unlike bumblebees which land on the flower.  Hemaris thetis have been collected from mid-April to late July in the Pacific Northwest, with the later records from higher elevations.