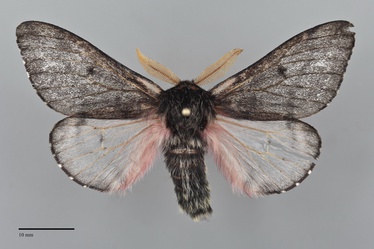 Coloradia doris is the smaller (FW 27–35 mm (males); 31–37 mm (females)) of two Coloradia species in the Pacific Northwest. In our region, it only flies in the mountains of southeastern Idaho during early summer. Males have hoary charcoal forewing and a translucent pink hindwing with limited dark markings, both much darker in females which have a smoky black hindwing suffusion. The forewing lines delimiting the medial area are nearly black with adjacent whitish shading, fairly diffuse, with zigzag antemedial and regularly scalloped postmedial lines; the postmedial line is relatively straight. The subterminal line is whitish, diffuse, drawn toward the base as a series of points between the veins and diffuse toward the margin. The discal spot is black, bar-like, and slightly oblique to the wing axis. The hindwing discal spot is faint, often absent, and the medial line is only evident near the anterior margins in males and a faint broad diffuse band in females. The body is covered in loose hairlike black and white scales, appearing shaggy. The antennae of both sexes are yellow; males are quadripectinate and females weakly bipectinate.

This species can only be confused with Coloradia pandora with which it is potentially sympatric in the limited Pacific Northwest range of C. doris. The hindwing of C. doris lacks a well-defined marginal band in both sexes, has a much smaller or absent hindwing discal spot, and appears more translucent than that of C. pandora.

This moth flies in mountain forests with pines.

Coloradia doris has only been found in the mountains of southeastern Idaho in the Pacific Northwest.

This species is widely distributed in the Rocky Mountains of the United States of America and northern Mexico. Its range extends from south-central Montana south to New Mexico and Arizona west to Nevada.

Coloradia doris feeds on Ponderosa pine (Pinus ponderosa). It might use other hard pines as well, including lodgepole pine (Pinus contorta) in Idaho (Tuskes et al. 1996). Young larvae feed in groups whereas older larvae are solitary.

This species flies earlier in the year than other Coloradia species, as early as April in parts of its range. It should be sought from May to July in our region. Adults are nocturnal and are attracted to light. Like other giant silkworm moths adults do not feed during their brief lifetime.