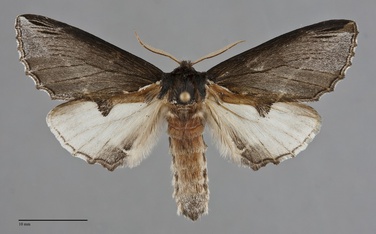 This species can be identified by the shape and color of its forewing.  The combination of the posterior margin flange and gray color with tan and white base are diagnostic.

The larva is smooth gray-brown with thoracic and caudal humps.  It is illustrated by Powell & Opler (2009) and Miller et al. (2018)

This species is found in boreal and montane forests with quaking aspen.  It is usually uncommon in the Pacific Northwest.

This species has a northern and Cordilleran distribution, occurring north and east of the Columbia Basin and Snake River Plain.  Washington records extend as far west as Mazama, Okanogan County.  It has been recorded as far north as the Peace River region of British Columbia.

This species is found in boreal forests across the Continent.  It occurs from southern Canada to New Jersey on the East Coast where it is describes as rare by Forbes (1948).

This species is a foodplant specialist on Salicaceae including both willows (Salix spp.) and cottonwoods (Populus spp.).  It particularly seems to prefer quaking aspen (P. tremuloides).

Adults are nocturnal and come to light.  They are found during the summer, with most Pacific Northwest records from June to early August.  They do not feed as adults.