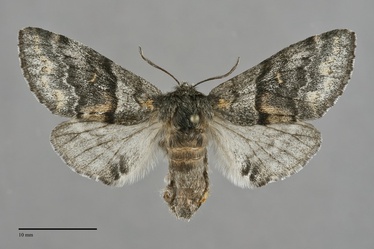 This species can be identified by its spring flight period, hoary dark gray color with patches of olive or ochre on the forewing, and a diffuse dark discal spot filled with the color of the patches.  It is closest in appearance to Gluphisia avimacula, a rare species only known from southern British Columbia in our region.  However, in G. severa, the forewing antemedial line is bent in the cell and the discal spot lacks a dark outline.  The antemedial line is nearly straight anterior to a bend near the anal vein and the pale discal spot is rimmed with black in G. avimacula.  Gluphisia severa is larger than G. septentrionis and has dark markings on the hindwing.  The hindwing of G. septentrionis is uniformly gray.  Gluphisia septentrionis is a smaller moth that flies later in the season, usually not beginning until the end of the flight of G. severa and peaking later in the summer.  It has less well-developed markings and lacks a discernible discal spot.

The larva is smooth, slender, and bluish-green, with a very thin yellow stripe along each side and many small yellow spots. It is depicted by Miller et al. (2018).

This species is common in coastal rainforests, mixed hardwood forests west of the Cascades, high elevation montane conifer forests in both the Cascades and Rocky Mountain region extending to the Blue Mountains.

Gluphisia severa occurs in forests throughout the Pacific Northwest as far north as north-central British Columbia.  It is not found in arid steppe habitats and is absent from much of the Columbia Basin, southeastern Oregon except on the larger mountains, and southern Idaho.

This species occurs in western North America.  The range includes western Alberta, the northern half of California, and Nevada outside of the Northwest.

This species is a foodplant specialist on Salicaceae, including both willows (Salix spp.) and cottonwoods (Populus spp.).

Adults are single brooded and occur in the spring.  Pacific Northwest records are from early March through June.