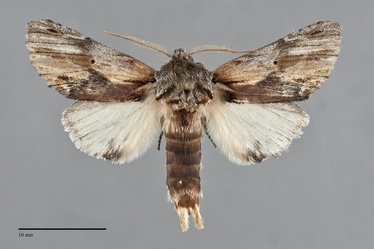 Oedemasia salicis is a small to medium-sized, prominent moth (FW length 14–16 mm.) that flies east of the Columbia Basin and in western Oregon during the summer. It has a mottled, light blue-gray and reddish-brown forewing.  Males have a lighter colored and more mottled forewing than the females.  The predominant pattern in both sexes is light gray on the anterior and distal area, with darker red-brown and black streaks at the base and posterior margin.  The lines are barely evident, with vestiges on the costa and veins in most specimens.  The most prominent marks are a thin black basal dash, punctate discal spot (lacking in some specimens), and one or two black streaks near the apex.  Males have white hindwings with black at the anal angle.  The female hindwing is dark gray.  The thorax is brownish gray in males and browner in females, with weak posterior tufts.  The male antenna is bipectinate with a long narrow distal portion, while that of the female is simple.

This species is transferred to the genus Oedemasia Packard in a recent check list of New World prominents (Becker 2014), having previously been referred to as Schizura concinna (J.E. Smith, 1797)

The larva has short, hairy scoli or tubercles, is orange with black and white lateral stripes, and has a red thoracic hump.  It is illustrated by Miller Hammond (2003).

This species is common to abundant in hardwood forests, riparian zones, and urban areas throughout North America based on collection of early stages.  However, adults may not be attracted strongly to lights and are rarely collected.

This species has a curious distribution in the Pacific Northwest.  It is restricted to the eastern part of our region in the northern part of its range, occurring in southeastern British Columbia, the adjacent Idaho Panhandle, and eastern Washington.  Further south it is found much further west in western Oregon and is absent from the interior of that state and southern Idaho.

This species is broadly distributed throughout much of eastern North America where it occurs from southern Canada to the Gulf of Mexico.  It is found throughout California along the Pacific Coast but is absent from the Rocky Mountains and Intermountain regions.

This species is a generalist hardwood feeder using a very wide diversity of trees and shrubs in the families Fagaceae, Betulaceae, Rosaceae, Aceraceae, Rhamnaceae, Ericaceae, and many others.  The larvae are sometimes pests in fruit orchards.

Adults appear to be single brooded and are most commonly found in mid- to late summer.  They are nocturnal and come to light, although perhaps not as strongly as most other night-flying moths.  Like other prominent moths they do not feed as adults.