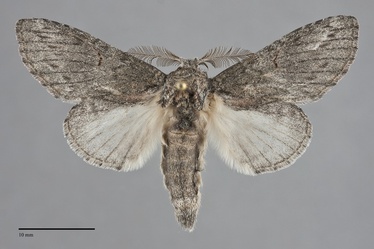 Cecrita lunata is a large (FW length 22–24 mm), powdery gray prominent moth that flies in southeastern Idaho during the summer. It has a thin, black reniform spot and very wide male antennae.  The forewing is nearly uniform dusty gray, slightly lighter near the subterminal line.  Some specimens, especially males, have patches of tan near the base of the forewing.  An ill-defined black dash is present at the base.  The dominant forewing markings are a thin curved black discal spot cross the end of the cell and a series of ill-defined dark gray wedges in the distal subterminal area near the faint pale subterminal line.  The hindwing is pale whitish gray powdered with gray at the anterior and outer margins, a powdery postmedial line that is darkest on the posterior wing, and dark gray veins and thin terminal line.  The hindwing fringe is light gray, darkest at the anterior margin and on the veins near the anal angle.  The thorax is powdery gray, often with tan on the central and posterior aspect.  The bipectinate male antennae are plume-like.

Males of this species can be identified by their southeast Idaho distribution, gray color, and very wide antennae.  The forewings are similar to those of Notodonta torva, which is found in British Columbia, but C. lunata lacks a posterior flange on the posterior margin of the forewing and a pale halo around the discal spot that are present in this species.

This species is widespread in forests of the Rocky Mountain region, particularly in quaking aspen forests.  It is common in the Wasatch Mountains.

This species has only been found in the Wasatch Range of southeastern Idaho.

Cecrita lunata is found in the Rocky Mountain region from Wyoming and Idaho south to Arizona, New Mexico, and western Texas.

No information is presently available regarding larval foodplants for this species, but it may use quaking aspen (Populus tremuloides) based upon habitat association.

The adults occur from mid-June to early August.  They are nocturnal and come to light.  As with other prominent moths they do not take nourishment as adults.