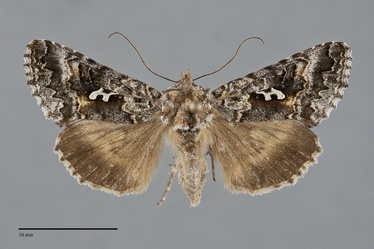 Syngrapha alias is a medium-sized (FW length 15 - 17 mm) mottled dark gray moth that flies along the Pacific Coast and in wet forests in much of our region during the summer. It has greenish tints, an ornate silver stigma on the mid-forewing, and a brown and gray hindwing. The forewing has a slightly pointed shape, a slightly scalloped fringe and a small flange at the anal angle. It is mottled powdery dark gray, often with metallic silvery green scales basal to the antemedial line and an oily sheen on the distal wing. A patch of lighter gray is usually present on the anterior wing lateral to the reniform spot. The median area below the cubital vein and a shade preceding the subterminal line are dark blackish gray, sometimes with a small patch of reddish brown near the postmedial line below the distal stigma. The stigma is thick, silver-white, usually a horizontal line with two round posterior projections and a single anterior spur or round projection on the distal half. The lateral portion is sometimes separated from the rest as a large satellite spot and is less commonly absent. The basal, antemedial, and postmedial lines are gray to black filled with gray to silvery white. The basal line is usually black, evident on the anterior two-thirds of the wing. The antemedial line is gray to black on the costa, interrupted by the cell, and black with light gray to silver filling below the cubital vein where it is wavy and strongly curved toward the posterior base. The median line is diffuse, black, indistinct against the dark background. The postmedial line is faint gray on the anterior wing and black and light gray or silver below the cubital vein. It is irregular, strongly drawn toward the base on the costa and slightly oblique toward the base across the rest of the wing. The subterminal line is thin pale gray and is preceded by a black and gray shade, darkest next to the line. It is very irregular with a broad tooth toward the margin below the apex and a strong W-mark near vein CuA1. The terminal line is a series of pale lunules preceded by black wedges and followed at the margin by small black dots. The fringe is checkered light and dark gray. The orbicular spot is pale, round, with filling of the adjacent color. The reniform spot is hourglass-shaped, thin and pale, surrounded by ill-defined black and filled with the adjacent color and a black spot at the lower end. The hindwing is gray-tan with light gray basal suffusion and darker gray veins, discal spot, faint postmedial line, and a wide poorly marginated marginal band. The hindwing fringe is pale tan with a yellow-tan base and dark checkering. The head and thorax are powdery brown-gray with long tufts on the posterior thorax. The dorsal abdomen bears additional tufts. The male antenna is filiform.

This species can be identified by its mottled dark gray color with silver scales on the wing base and thick ornate silver-white stigma. Most other Syngrapha species with gray forewings have thinner stigmas, and many, including Syngrapha celsa, Syngrapha angulidens, and Syngrapha interrogationis, are more blue-gray or violet-gray in color rather than charcoal or blackish like S. alias. Syngrapha rectangula has a similar stigma as S. alias but has much more greenish silver on the wing and can be easily distinguished by this feature. However, Syngrapha abstrusa is closely similar to S. alias in color and pattern and cannot be reliably differentiated without dissection. According to Lafontaine & Poole (1991) it tends to be slightly small, has a lighter gray median area, and tends to have a stigma with a detached satellite spot. Males of S. alias have a foot-shaped distal valve, blunt in S. abstusa, and a shorter clasper and the females differ in the ratio of length to width of the ductus bursae (3-4x as long as wide in S. alias; 5-6x in S. abstrusa).

As of February, 2012, the identity of inland specimens of S. alias and S. abstrusa have not been dissected to confirm their identity. Therefore, all records are assigned to both species in the range of S. abstrusa shown in Lafontaine & Poole (1991). Those from the Pacific Coast and north of southern British Columbia are assumed to be S. alias.

This species is found in forests throughout most of the Pacific Northwest. It occurs along the immediate Pacific Coast and in the Cascades but does not appear to be generally distributed in other lowland forests, likely due to a lack of spruces. It is more widely distributed in British Columbia, northern and eastern Washington, northern Idaho, and northeastern Oregon.

This species has a wide distribution in northern North America, extending across the subarctic and boreal zone from Alaska, Yukon Territory, and Northwest Territories to northern Quebec and Newfoundland. The southern limits are northern California along the West Coast, Colorado and New Mexico in the Rocky Mountains, and the Great Lakes region and New Jersey in the East. A single record is shown for eastern North Carolina in Lafontaine & Poole (1991).

This species is a foodplant specialist feeding on spruces (Picea spp.) in the Pinaceae.  In the Pacific Northwest, the primary larval foodplants appear to be Engelmann spruce (P. engelmannii) at high elevations in the Cascades and Sitka spruce (P. sitchensis) at low elevations near the ocean in the Coast Range.

The flight period of S. alias is June through August in our region, with most collected specimens being from July and early August. It is nocturnal and comes to lights. Specimens of this species were collected at the flowers of dogbane (Apocynum spp.) shortly after nightfall in Alberta.