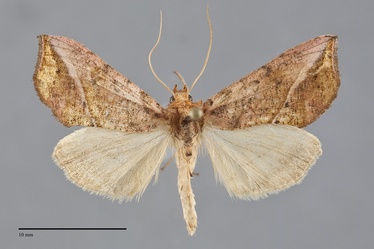 Pseudeva purpurigera is a small (FW length 13–14 mm), brassy yellow-brown moth that flies in central Montana near the eastern edge of the Pacific Northwest during the summer. Its forewing has a slightly falcate, pink apex. The forewing has a slightly hooked tip, a strongly convex outer margin, and a slight flange at the anal angle. The color is light yellow-brown, strongly peppered with black scales. A triangular pink area extends to the apex and adjacent anterior margin from the anterior half of the postmedial line. The outer forewing has a strong brassy sheen. The markings are limited. The basal line is often limited to two dark spots near the wing base. The antemedial line is usually faint gray, occasionally darker gray. It is evident below the cell where it is smoothly incurved. The median line is gray, evident anterior to the cell. The postmedial line is drawn toward the base on the costa, turned sharply below the costa to extend straight to the trailing margin and a 45° to the forewing. It is usually light brownish gray, darker posteriorly, but occasionally dark gray. Black spots are present along the lateral line in the fold and on the trailing margin. The subterminal line is dark, only evident near the apex. The terminal line is pale yellow, evident on the concave wing margin near the apex. The fringe is yellow-brown. The orbicular and reniform spots are very faint and thin, gray filled with the ground color. The hindwing is pale yellow with a sheen, immaculate or with light gray discal spot, postmedial line, and diffused marginal shade. The hindwing fringe is pale yellow or slightly checkered with light gray. The head and collar are light orange-brown. The posterior thorax is slightly darker brown. The palpi are long, curving above the top of the head. The tegulae are flange-like, extending from the sides of the thorax like a ruff collar. Median tufts of long scales are present on the posterior median collar. The male antenna is filiform.

This pretty species can be readily identified by the brassy sheen, pink apex, and falcate wing shape. The long upturned palps and flange-like tegulae can be examined for confirmation. Pseudeva palligera, the more widespread species in the Northwest, is smoother yellow without the peppering of dark scales, lacks the brass sheen on the distal forewing area, and has lighter whitish hindwings than P. purpurigera.

Larva is smooth with only two pairs of abdominal prolegs, and with raised dorsal humps in the middle.  The color is green with white lateral slashes and stripes.  It is illustrated by Lafontaine & Poole (1991).

This species is common and widely distributed in moist meadows and forest habitats of eastern North America extending westward to the Rocky Mountains.

Pseudeva purpurigera is known from west-central Montana just east of the Continental Divide. It is not confirmed for the Pacific Northwest but should be sought in western Montana and eastern Idaho in the Rocky Mountains. It has been collected in the Peace River region of northeastern British Columbia.

This species is most widespread in the East but also occurs in the Rocky Mountains. The eastern populations extend from Newfoundland to North Carolina. The range extends west to Alberta through the northern United States and southern Canada, then south to Colorado, New Mexico, and eastern Arizona.

This species is a foodplant specialist feeding on meadow-rue (Thalictrum spp.).

The flight period of P. purpurigera is summer, with records from late June to early August across its range.