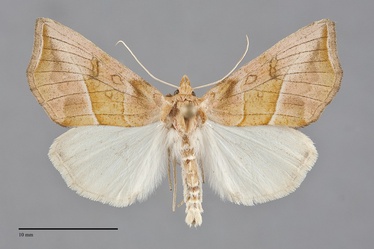 Pseudeva palligera is a medium-sized moth (FW length 15 - 16 mm) that flies in forests south of southern British Columbia during the summer. It has a golden-yellow, slightly hook-tipped forewing with pink and light purple shading. The forewing is relatively broad with a slightly falcate apex, strongly convex outer margin, and a small flange at the anal angle. The ground color is golden brown, slightly darker brown in the anterior base and in the lateral subterminal area opposite the cell and near the posterior margin. The anterior distal forewing area is lighter purple-gray. Extensive light pink suffusion is present on the wing base, costa, and on the mid- and posterior distal area. The antemedial and postmedial lines are dark yellow-brown with pale purplish gray outside the median area. The antemedial line is nearly straight across most of the wing, touching the orbicular spot, and bent toward the base near the trailing margin. The postmedial line is strongly oblique toward the outer margin from the costa to the level of the anterior cell, bent acutely toward the base, and then very slightly concave toward the base to the trailing margin. The subterminal line is a very subtle transition between darker brown in the subterminal area and a lighter terminal area. A thin brown terminal line is present at the base of the gold-brown fringe. The orbicular spot is golden brown, oval, filled with the ground color. The reniform spot is similar, narrow and upright, filled with the ground color or slightly darker brown. A small suborbibular spot is present in a few specimens. The hindwing is pale yellow-gray off-white with a slight sheen, minimally suffused with gray near the outer margin in some specimens. The hindwing fringe is white. The head and thorax are golden brown with a pink tint. The male antenna is slightly bead-like.

This species is widely distributed throughout the Pacific Northwest, but is usually uncommon to rare.  The limited information available suggests that it occupies moist meadow habitats at low to mid elevations both east and west of the Cascades.

Pseudeva palligera has been found at a number of widely dispersed sites in our region. It occurs in northern Washington as far east as the Methow Valley. It occurs in western Oregon. The only Idaho records are from the Wasatch Mountains in the southeast corner of the state and Wallace in the Panhandle.

The range of this species is the western United States and extreme southern Canada west of the Rocky Mountains. It has been found throughout California and the northern parts of Nevada and Utah to the south of the Northwest. It has also been collected in extreme southwestern Alberta.

No information is presently available regarding larval foodplants of this species, but it is associated with meadow rue (Thalictrum sp) and this is the likely foodplant.

This species flies during the summer, most often from mid-July through August. It is nocturnal and comes to lights.