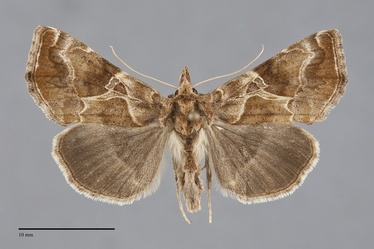 Polychrysia morigera is a rarely collected small (FW length 14 - 15 mm) smoothly mottled warm brown moth that flies in western Oregon and eastern Idaho during the summer. It has a long sickle-shaped stigma that extends to the postmedial line. The forewing has a slightly pointed apex in some specimens, is nearly straight from the apex to the mid-forewing, and then slightly angled towards the base. It is mottled, with light-gray from the base to the antemedial line and extending laterally filling the center of the stigma and the orbicular spot, lightly olive-brown in the median area, and warm brassy brown distal to the postmedial line. The stigma is slightly yellow-off white, non-metallic, sickle-shaped and open, extending with the base on the antemedial line and the tip touching the postmedial line above the fold. The basal, antemedial, and postmedial lines are light brown off-white. The basal line is short, curved on the costa. The antemedial line is oblique from anterolateral to posteromedial, appearing fused to the basal part of the stigma. The postmedial line is mostly straight, oblique from anterolateral to posteromedial, but curved sharply toward the base on the costa and focally concave toward the base in the fold below the tip of the stigma. The subterminal line is pale, evident below the apex. The terminal line is pale, even. The fringe is purplish gray with a dark gray spot on the mid-wing. The orbicular spot is pale, filled with the color of the adjacent stigma and wing base, quadrate in shape and located in the cell at the anterior stigma and appearing to continue the anterior part of the stigma toward the costa. The reniform spot is lost in the mottling of the adjacent wing. The hindwing is dark grayish brown, with darker brown discal spot, postmedial line, and broad marginal shade. The terminal line is thin, brown, and the hindwing fringe has a yellow and gray base, and a whitish edge containing patches of gray-brown. The palpi are very long, reaching above the head. A tuft of light hairs are present on the top of the head. The thorax is brown. The tegulae are flange-like and project away from the central thorax. The central and posterior thorax contain several long tufts of scales. Additional tufts are present on the dorsal abdomen.

This species can be identified by its long pale open stigma that reaches across the median area and touches the postmedial line. In the subfamily Plusiinae only Polychrysia esmeralda has similar long curving palpae and flange-like tegulae.

Larva is smooth with only two pairs of abdominal prolegs, and is pale green with a darker mid-dorsal stripe and a white lateral stripe.

This species exists as three widely disjunct populations in the Appalachians, the Rocky Mountains, and west of the Cascades in the Pacific Northwest.  The primary habitat is the wooded riparian zone along creeks and rivers at low elevations in the Coast Range and Willamette Valley, but it also occurs on native wet prairies with the foodplant.  This species is usually very rare and sporadic, but may be locally common where the foodplant is abundant.

Polychrysia morigera has a disjunct distribution in the Pacific Northwest. Most records are from western Oregon where is known from the Willamette Valley and the Siskiyou Mountains. It also occurs in the Wasatch Mountains of southeastern Idaho.

The populations of this species are grouped in three clusters in North America, two of which are represented in the Northwest. The most westerly of these is found in western Oregon and northern California. A Rocky Mountain population occurs from western Montana to Colorado. In the east it occurs in the Appalachian Mountains from Tennessee to Pennsylvania and Ozark Mountains of Missouri.

This species is a foodplant specialist feeding on larkspurs (Delphinium spp.) in the Ranunculaceae.  In western Oregon, the primary larval foodplant is D. trolliifolium in riparian wooded habitats, but it also feeds on the rare D. pavonaceum of native wetland prairies in the Willamette Valley. This species should be sought wherever large Delphinium species grow.

Adults are single brooded and fly in summer. The few Pacific Northwest records are from August. Adults are closely associated with larkspurs and fly when the plants are flowering. They are nocturnal and come to lights.