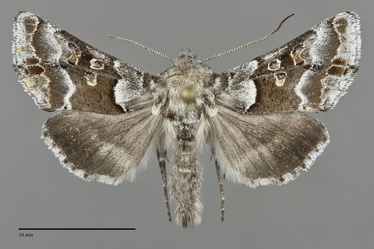 Euchalcia albavitta is a rarely collected, small (FW length 13–14 mm), marbled gray moth that flies in deserts in early spring. It has a pale base bordered by a black line in the median area and a dark brown spot in the terminal area. The ground color of the forewing is light brownish gray, darkest in the medial median and lateral subterminal areas. The cell between the spots is warmer brown. The wing base is pale gray, focally darker gray medial to the basal line. The terminal area is light gray, darker near the apex, with a chestnut brown spot filling the interspaces on both sides of vein M3 and extending into the adjacent fringe as dark gray. The transverse lines are pale whitish gray. The basal line is short. The antemedial line is bilobed, with laterally convex segments between above and below the cubital vein. It is preceded by a black spot on the trailing margin and followed by a black shade across the wing. The postmedial line is incurved on the costa, then slightly oblique from anterolateral to posteromedial with segments concave toward the base opposite the cell and below the cell. A black spot is present in the line at the trailing margin. The subterminal line is slightly irregular, more so on the medial side, with pale extension onto the terminal veins near the apex and on the mid-wing, undulating in course, convex lateral opposite the cell and slightly concave on the posterior wing. The terminal line is pale. The fringe is weakly checkered light gray and gray, dark at the apex and lighter posteriorly, with a dark gray patch adjacent to the brown spot on the terminal area. The orbicular, and reniform spots are white to pale yellow and filled with the ground color and darker gray posteriorly. An ill-defined suborbicular spot located below the orbicular spot is similar to it in size but usually less well-defined and slightly darker. The hindwing is gray with diffuse darker postmedial line and marginal band and a weakly checkered white and gray fringe. The head and thorax are pale gray. The male antenna is filiform.

This species can be identified by its mottled light gray forewing with pale lines, black spots where the antemedial and postmedial lines meet the trailing margin, and a brown spot in the mid-terminal area.

This species occurs in arid shrub steppe and desert. In the Pacific Northwest it has been found in moist draws with ample woody vegetation.

Euchalcia albavitta has only been found a few times in the Pacific Northwest. These records are from Harney and Malheur counties in eastern Oregon and in adjacent south-western Idaho. This species might be more widely distributed, but there has been limited collecting in suitable habitat during the early spring flight period of this moth.

Euchalcia albavitta is found in the dry interiors of California, Nevada, and Arizona.

No information is presently available regarding larval foodplants for this species. It most likely feeds on a species of Ranunculaceae based on known foodplants of related species.

Adults are single brooded and fly in early spring. They are nocturnal and come to lights.