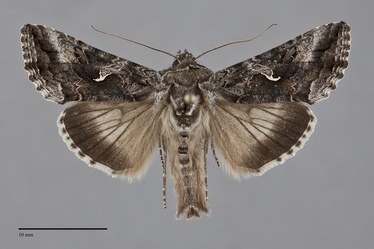 Autographa californica is a medium-sized (FW length 16–21 mm), strongly mottled, blue-gray moth with a long lateral part to the silver-white stigma and a patch of chestnut brown. It flies almost everywhere across the region from early spring to late fall. The forewing has a pointed apex and a slight flange at the anal angle. The color is somewhat variable from blue-gray and black to lighter purple gray and dark brown. The median area is dark gray – especially the mid-portion surrounding the open part of the stigma and the orbicular spot, most of the subterminal area except the most anterior portion, and the apical and mid-forewing terminal area – while the filling of the basal stigma, anterior subterminal area, and posterior terminal area are light gray. A small patch of chestnut brown is present near the lateral portion of the stigma, and a coppery or dark greenish sheen is present on the dark portions of the subterminal and terminal areas. The stigma is comprised of a long basal "V" or "U," open toward the medial costa, fused to an elongate sideways comma that is thickest laterally. These parts are rarely separate. A short black basal dash is present. The basal, antemedial, and postmedial lines are gray to partially black, double, and filled with light gray to warm tan that is most prominent posteriorly. The antemedial line is evident below the cell, straight and strongly oblique toward the forewing base to the trailing margin. It appears to continue as the most medial limb of the stigma. The postmedial line is very faint anteriorly, gradually strengthening below the cell. It is waved anteriorly, becoming irregular with several fine teeth in the fold. The subterminal line is uneven with a dentil-like step-off below the apex and a "W"-mark with teeth posterior to M2 and M3. It is preceded by a dark gray shade near the apex and a thin black line that extends across the subterminal area opposite the indentation of the reniform spot. The terminal line is a series of dark lunules between the veins, often preceded by a row of small pale spots. The fringe is checkered light and dark gray and is scalloped. The orbicular and reniform spots are thin and pale. The orbicular spot is pale gray like the adjacent wing and is situated anterior to the open part of the stigma. The reniform spot is thin and obscure, filled with the ground color and black in the lower third. The hindwing is gray-tan with a fairly well-demarcated gray marginal band and gray veins. The fringe has a white edge and a scalloped light yellow and gray base. The head and thorax are gray to brown-gray with darker barring on the collar and dark and light gray on the edges of the tegulae and posterior tufts. Additional tufts are present on the abdomen. The male antenna is filiform.

This abundant species is most similar to Autographa pseudogamma, a species that flies at high elevations, and Rachiplusia ou, a rarely collected moth that has only been found in western Montana in the Northwest. A. californica can be told from A. pseudogamma by the black line across the anterior subterminal area that is lacking in A. pseudogamma. A. californica is quite similar to R. ou, but is bluer gray, more mottled, and has a longer lateral part of the stigma. The lateral stigma of R. ou is a small circle, not comma-shaped as in A. californica. Structurally, R. ou has a rough patch of gray scales on the frons and spines on all the tibiae unlike A. californica. They also differ in details of the genitalia described in Lafontaine & Poole (1991). Syngrapha celsa could potentially be confused with A. californica because both are common gray moths with stigmas on the forewing. However, Syngrapha celsa is entirely gray on the forewing, and the stigma is distinctly yellowish.

Larva is smooth with only two pairs of abdominal prolegs, and is green with a thin white lateral line.  It is illustrated by Miller & Hammond (2003).

This species is common to abundant throughout western North America.  It is often an agricultural pest feeding on herbaceous crops such as alfalfa or peas in open field and urban habitats.  It is also very common in natural meadow habitats at all elevations, ranging from coastal grasslands at the edge of the ocean to subalpine meadows at high elevations in the Cascades and Rocky Mountains.  It also occurs on sagebrush steppe at low elevations east of the Cascades, but is more uncommon and sporadic in desert habitats outside of irrigated crop fields. This moth is so ubiquitous that a map of its distribution is a reasonable map of where moths have been sampled!

Autographa californica is found throughout our region. There is no location or habitat where this moth cannot be found.

The range of this species is western North America. It is most common from southern British Columbia to southern Saskatchewan and south to the border with Mexico. It has also been found in central and southern Alaska.

This species is a generalist feeding on a wide variety of herbaceous plants, but appears to prefer legumes (Fabaceae).

Adults are partially diurnal, and frequently visit flowers for nectar in open meadow habitats during the day. They are most commonly collected during the night and come readily to lights. They have been collected at almost all times of the year, beginning in February and extending to the end of November. The phenogram suggests the presence of three peaks, one in May, one in July, and one in September.

This species is a recognized pest of vegetable and forage crops, and is particularly destructive to legume crops such as peas, alfalfa, and clover.