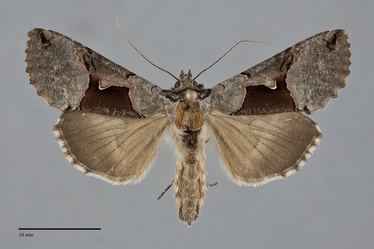 Autographa ampla is a distinctive medium to large moth (FW length 17–21 mm) that flies in forests throughout the Northwest during the summer. It has a black median area below a thin stigma on a plain gray forewing and a gray hindwing. The forewing has a slightly scalloped and strongly convex outer margin and a small flange along the anal angle. The ground color is medium-dark gray, finely mottled and slightly lighter with a slight sheen on the wing base and in the posterior subterminal area. A black spots are present at the apex and anal angle in the terminal area. The entire median area posterior to the thin horizontal stigma is velvety brown-black, darkest near the stigma and fading slightly posteriorly. The stigma is horizontal, simple and thin, silvery white, with a straight medial component and a slightly thicker lateral U shape. The filling of the concave portion is warm tan. The basal line is black, evident on the costa. The costal portions of the antemedial and postmedial lines are thicker black. The rest of the antemedial line begins at the cubital vein and is tan medially and black laterally, slightly curved and oblique toward the base at 45° to the wing. The postmedial line is evident from the reniform spot to the trailing margin and has black inner and tan outer components. It is slightly waved and strongly concave toward the base. The subterminal line is black near the apex and barely evident elsewhere as the transition from lighter subterminal area to the darker terminal area. The terminal line is absent. The fringe is dark at the tip of the apex and concolorous with the terminal wing elsewhere. The reniform spot is a tilted bar, thin tan surrounded by uneven thickness black and filled with the ground color. The orbicular spot is absent. The hindwing is tan-gray with gradually darker gray toward the outer margin, discal spot, veins, and terminal line. The hindwing fringe has a white edge, yellow and gray base, and weak mesial gray checkering. The head is gray. The collar has a tan base, a black transverse median line, and gray edge. The tegulae are gray and long tufts on the median thorax are red-brown. Additional darker tufts are present on the dorsal abdomen. The male antenna is filiform.

This species can be positively identified by the combination of thin stigma, black median area with nearly even gray subterminal and terminal areas, and dark hindwing. Other members of the subfamily Plusiinae with a stigma and black median area either have a contrasting darker subterminal area (Autographa v-alba and Autographa speciosa) or a yellow and black hindwing (several Syngrapha species including S. orophila). Autographa ampla could also be mistaken for Syngrapha epigaea, but S. epigaea has a warm brown patch in the dark median area between the end of the stigma and the postmedial line and it lacks black marks at the ends of the terminal area that are present in A. ampla.

Larva is smooth with only two pairs of abdominal prolegs.  It is green in color with fine white dorsal lines and a thin pale yellow lateral line, and is illustrated by Lafontaine & Poole (1991).

This species is widely distributed in moist forest habitats throughout much of North America.  In the Pacific Northwest, it is usually uncommon, but may be locally common in moist riparian forests along creeks and rivers such as in the Coast Range.

Autographa ampla is found in forests throughout most of the Pacific Northwest as well as further north in central and northern British Columbia. It has not been found in much of southeastern Oregon or southern Idaho.

This species has a large range in North America It is found in a band-like distribution through southern Canada and the northern United States, extending as far north as northern Manitoba, northern Ontario, and Newfoundland. It ranges further south in the Appalachian and Rocky Mountains, reaching North Carolina in the East and Colorado, New Mexico, Utah, and Arizona in the Rockies. It also extends south to central California, mostly in the western part of the state.

This species is a generalist feeding on many kinds of hardwood trees and shrubs, but may particularly prefer Betulaceae, Salicaceae, and Rosaceae.

The flight period of A. ampla is the summer. It has been collected from mid-May to early September in our region but is most common in June and July. It is nocturnal and comes to lights.