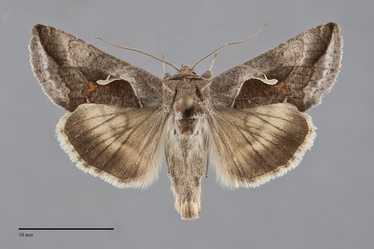 Anagrapha falcifera, the Celery Looper, is a common gray-brown to dark brown, small to medium-sized moth (FW length 14–17 mm) that flies throughout most of our region during most of the year. It has a patch of velvety warm brown on the median area beneath a silver stigma and a small patch of red near the posterior postmedial line. The forewing has a pointed apex and a fairly prominent flange at the anal angle. The ground color is medium-dark to dark gray-brown, slightly darker in the anterior median area and in the lateral subterminal area. A darker patch with a smooth laterally convex contour crosses the subterminal line to end at the apex. The median area below the cubital line is smooth velvety warm brown with a small brick-red patch adjacent to the postmedial line below the tip of the stigma. The stigma is silver, the main portion horizontal comma-shaped with the concave side anterior and the thick portion lateral, with a short anterior spur from the basal segment. The antemedial line is thin and silver, oblique and straight toward the base from medial stigma at the cubital vein and obsolete further anteriorly. The postmedial line is faint gray-brown, double and filled with the ground color, with a short silver segment near the trailing margin that is often limited to a single spot. It is drawn sharply toward the base on the costa, then smoothly excurved and oblique toward the base to the fold where it bends toward the trailing margin. The posterior segments is finely waved. The subterminal line is dark, angled several times across the wing and forming a W-mark centered on vein CuA1. The distal terminal area and fringe are concolorous pale gray to gray-brown. The spots are usually obsolete, although the top of the reniform spot is faintly visible as a brown line in some specimens. The hindwing is tan with gray basal suffusion, discal spot, postmedial line, ill-defined marginal band, and thin terminal line. The hindwing fringe is pale tan off-white with a checkered yellow and gray base. The head and thorax match the forewing ground color, with slightly reddish brown tufts on the posterior median thorax and dark brown tufts on several abdominal segments. The male antenna is filiform.

This common species can usually be recognized by its comma-shaped silver stigma, velvety brown and brick red median area, and brown hindwing with gray postmedial and marginal markings. It is most similar to Autographa pasiphaeia, an uncommon species in the Northwest. It has a narrow whiter stigma, lacks the red color near the postmedian line, and has a pale yellow hindwing with a dark marginal band but no postmedial line.

The color of the wings varies seasonally. Spring specimens are grayer and those from later in the year are browner.

Larva is smooth with only two pairs of abdominal prolegs.  The color is green with faint, wavy white dorsal and lateral lines.  It is illustrated by Lafontaine & Poole (1991).

This species is common to abundant throughout most of North America in open agricultural lands, disturbed urban areas, and open grasslands of all types including native prairies.  In the Pacific Northwest, it is most common in disturbed agricultural lands at low elevations east of the Cascades.  It also occurs in valley grasslands west of the Cascades, but is more sporadic and less common in this area.

Anagrapha falcifera is widely distributed in the Northwest as far north as the southern third of British Columbia. The distribution is most restricted west of the Cascades where it is limited to the Puget Lowlands in Washington and the Willamette Valley in Oregon.

This species is found nearly everywhere in the Continental United States and southern Canada. It is less common in the south and is absent from much of the Great Basin and all but the northern part of California.

The larva of A. falcifera is a generalist feeding on a wide variety of herbaceous vegetation including many agricultural crops in the families Asteraceae, Brassicaceae, and Apiaceae.

Adults of A. falcifera are active during night and day, flying from late April to early October in the Pacific Northwest. The phenogram supports the presence of at least two generations in our area and possibly three. Peaks occurrences are in May, early July, and September. This species comes to lights.

This is a common pest in a variety of herbaceous agricultural crops.