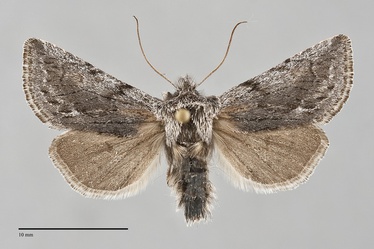 Pleromelloida bonuscula is a small (FW length 13 - 15 mm), dark gray, spring-flying moth that flies east of the Cascade Range. Its posterior antemedial and postmedial lines are fused. The forewing has a pointed apex and a smoothly convex outer margin. The color is dark gray, hoary lighter gray due to intermixed light scales along the costa and near the outer margin. The basal line is absent. The antemedial and postmedial lines are dark gray, fused across the fold but inconspicous except near the costa. The anterior antemedial line is thick, irregular, and obliqued toward the outer margin to the lower cell, then becoming thin and faint. The postmedial line is smooth and undulating, sharply excurved toward the outer margin near the costa, and then strongly oblique toward the base before turning horizontal to join the antemedial line. The subterminal line is a series of pale gray spots preceded by dark gray wedges and sometimes followed by smaller black spots. The line becomes continuous on the posterior wing and is drawn to the postmedial line in the fold to produce and white and black mark across the lower subterminal area. The terminal line and fringe are both gray, although the terminal line is barely evident. The hindwing, including the fringe, is dark brownish gray with a dark discal spot and thin terminal line. The head and thorax are hoary gray with light and dark transverse lines across the collar. Weak tufts are present on the posterior thorax and several of the abdominal segments. The male antenna is filiform.

This species is most likely to be confused with Pleromelloida conserta with which it flies. Pleromelloida bonuscula is slightly smaller in size and has less distinct forewing lines, especially on the posterior wing. Those of P. conserta are distinct across the entire wing.

This species is found in foothill canyonland and riparian habitats along creeks and rivers at middle elevations east of the Cascades.

Pleromelloida bonuscula is found in the peripheral portions of the Columbia Basin where it has been collected most commonly along the east slope of the Cascades and in the southeast corner of the state. It is widespread in southern British Columbia as far north as the vicinity of Williams Lake.  Only isolated records exist for the Panhandle in Idaho and Lakeview in southern Oregon.

This species is found in western North America. It occurs throughout most of California south of our region and has also been recorded from Colorado.

No information is presently available regarding larval foodplants of this species, but it probably feeds on snowberry (Symphoricarpos spp.) in the Caprifoliaceae, like closely related species.

The flight period of this species is in the spring. It has been collected from late February to mid-May, but is most common in late March and April in our region. It is nocturnal and comes to lights.