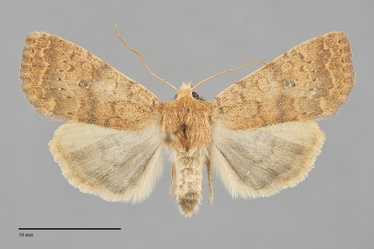 Sunira bicolorago is a fall-flying, small to medium-sized moth (FW length 13–17 mm) that is common in eastern North America and might extend west to eastern British Columbia. It has a light yellow-orange forewing with gray mottling and a pale yellow hindwing with light gray suffusion. The ground color is pale orange-yellow to orange-tan, darkest in the distal subterminal area and terminal area, which are a dark shade of the ground color to gray. The diffuse median line is similar in darkness and color. An uncommon form of this species is entirely gray distal to the median line. The basal, antemedial, and postmedial lines are orange-brown to gray, sometimes with a paler component along the sides of the latter two lines opposite the median area. The basal line is near the wing base. The antemedial line is angled toward the outer margin with three laterally convex segments, at each end and on the mid-wing. The postmedial line is moderately toothed on the veins, drawn a short distance toward the base on the costa and weakly excurved across the rest of the wing. The subterminal line is pale yellow-orange, slightly irregular, preceded by the aforementioned shade. The terminal line is a series of small orange spots. The fringe is slightly darker orange than the ground color, often checkered with gray. The orbicular and reniform spots are outlined in the color of the lines. The orbicular spot is round, filled with the ground color. The reniform spot is kidney-shaped, filled with the ground color and a gray to black spot in the lower end. The claviform spot is absent. The hindwing is pale yellow, suffused with gray toward the margin that is condensed into a postmedial line and submarginal band. The hindwing fringe is light yellow to gray. The head and thorax are orange to orange-gray, matching the color of the forewing. The male antenna is biserrate.

This moth can usually be identified by its mottled light orange and gray forewing color in combination with an uneven subterminal line, and gray suffusion on the hindwing. It is most similar to Sunira decipiens, a more common and widespread moth in the Northwest. It has darker and better defined lines and spots than S. bicolorago and lacks extensive gray suffusion on both wings. Sunira verberata is similar in size and pattern but has a darker forewing with a darker gray and red-brown shade before the subterminal line and a dark gray hindwing.

This species is common and widely distributed in low-elevation moist forest habitats throughout much of eastern North America.

Sunira bicolorago has been reported from eastern British Columbia, but we have not examined any specimens of this species from the Pacific Northwest.

This moth is widely distributed east of the Rocky Mountains, especially east of the 100th Meridian. It occurs from southern Canada to the Gulf Coast. It is less commonly collected further West, but has been taken in Alberta, Montana, and Colorado.

This species is a very broad generalist feeding on many kinds of herbs and hardwoods.

The flight period of this moth is the fall, most commonly in September and October across the entire range of the species. It is nocturnal and comes to lights. It is commonly collected at sugar baits in the East.