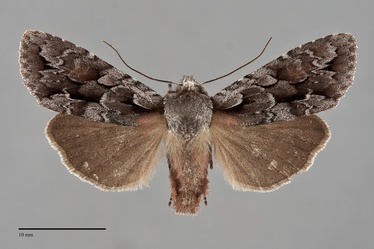 Lithophane thaxteri is a late fall and early spring-flying medium-sized moth (FW length 17–19 mm) that flies along the West Coast and in boreal forest. It has a mottled, bark-like gray forewing with basal and median dashes and red-brown in the reniform spot. The forewing is mottled medium-dark gray, brown-black, and black, darkest in the antemedial area and where the diffuse median line crosses the median area. The terminal area is brown-gray and black, darkest where the subterminal line touches the postmedial line opposite the cell and in the fold. A black basal dash widens at its lateral end and is bordered by a thin white line anteriorly. The anterior wing base is pale gray and the posterior base is copper-colored. A black bar extends across the median area in the fold. The basal, antemedial, and postmedial lines are black, double filled with light gray. The basal line is evident on the costa and at the end of the basal dash. The antemedial line is slightly excurved with teeth toward the base on the veins. The postmedial line is strongly toothed, is strongly offset toward the base on the costa and is nearly straight elsewhere with a slightly oblique course toward the base. The subterminal line is light gray, very jagged with spikes that extend to the postmedial line near M2 and in the fold. The fringe is checkered gray. The orbicular and reniform spots are outlined in black inferiorly. The orbicular spot is oval, is open toward the costa, and is filled with the gray ground color. The reniform spot is broadly ovoid, filled with the ground color and diffuse red-brown. The claviform spot is absent. The hindwing is dark gray with a pink sheen. The hindwing fringe is white with a pink-gray base. The head and thorax are gray with a black line across the distal collar and black lateral edges on the tegulae. The male antenna is biserrate.

This species can be identified by its bark-like gray forewing, red-brown reniform spot, and dark hindwing. The forewing resembles those of Lithophane ponderosa and Lithophane atara, two pine-feeding species. Both of them lack red filling in the reniform spot and have lighter pink or copper hindwings than those of L. thaxteri.

Lithophane thaxteri is geographically variable in North America. Populations from western North America are more mottled light and dark gray and more vividly colored than those from the East. The name L. t. rosetta (Barnes) is available for the West Coast populations for those wishing to recognize subspecies.

Larva is smooth, green with a thin subdorsal yellow line.  It is illustrated by Miller & Hammond (2003).

This species is widely distributed in boreal and montane wet forests and bogs.  It is usually rare and sporadic in our region, where it is mostly confined to bogs along the coast, in the Cascades, and in the Rocky Mountain region. This species is considered to be management sensitive, benefiting from the maintenance of open bogs against tree encroachment.

Lithophane thaxteri is found along the West Coast and in the boreal forest zone of southern Canada and northeastern Washington, extending south to the Blue Mountains and through the Cascades of Oregon. The range likely extends to northern British Columbia.

This species is widely distributed in northern North America. It occurs from Alaska to New Brunswick, south to Oregon, the northern Great Lakes region, and southern New England.

This species emerges during the fall and flies briefly prior to spending the winter in a torpid state. The moths emerge in the spring to mate and lay eggs. It has been found during September and from late March until mid-May in our region. This species is nocturnal and comes to lights and sugar baits.