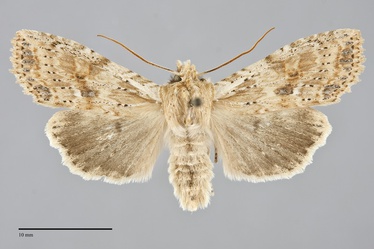 Lithophane innominata is a common, late fall and early spring-flying, medium-sized moth (FW length 17–18 mm) that flies in forests throughout our region. It has mottled light yellow-gray and orange-brown forewings with a short black bar across the lower median area. The forewing margin is scalloped. Its ground color is light yellowish gray, mottled with light orange-brown on the mid-wing and as a shade medial to the subterminal line. The terminal area is patchy gray, separated in two where the subterminal area reaches the outer margin on M2 and CuA1. The costa is cream, lightest white at the base. A dark form in which the wing posterior to the costa is suffused with gray from the base to the postmedial line is found rarely in our area. A short slightly blurry graphite-gray to black bar is present in the fold across the median area. The antemedial and postmedial lines are represented by paired black dots on the veins; the former line is weakly evident as a zigzag pattern on the posterior part of the wing and the postmedial line is evident as a pale line medial to the dots. The median line is orange-brown to brown, most evident as an oblique mark from the costa to the reniform spot. The subterminal line is the ground color, sinuous, extending to the outer margin on the mid-wing as a blurred W-mark. It is preceded by a red-brown shade or series of blurred wedges across the mid-wing. The terminal line is a series of prominent black spots. The fringe is of the ground color. The elongate oval orbicular spot is weakly outlined in orange-brown and is most evident as the ground color filling. The reniform spot is shaped like an upside-down hourglass, is more strongly outlined in orange, and is filled with the ground color and diffuse brown or gray at the lower end. The hindwing is light yellow-tan heavily covered with gray so that only patches of the ground show near the margin and at the fringe; a darker discal spot is usually evident. The head and thorax match the ground color, with angular tufts arising from the head and anterior thorax. The male antenna is biserrate.

This species can be identified by its mottled light yellowish and orange color and the black spot in the median fold. There are only a few Lithophane species in the Northwest that are not gray in color. The closest to L. innominata in appearance is Lithophane disposita, but it is light olive rather than warm light orange-brown and lacks the black median bar.

Rare specimens of L. innominata are suffused with darker brown or gray over much of the central forewing, resembling the dark form of L. petulca (form "ferrealis"). They can be associated correctly with L. innominata by the warm yellow color of the light parts of the pattern.  Many Lithophane species have light and dark forms, especially the species in which the forewing ground color is brownish. Many of these were named as forms—no longer an acceptable taxonomic category—and in the past some forms were considered to be different species. In L. innominata, the rarer dark form is the nominate one and the light form was called "illecebra."

The larva is smooth, mottled yellow, gray, and light green.  It is illustrated by Miller & Hammond (2003).

Lithophane innominata is widespread in the western parts of our region to Vancouver Island, British Columbia. It occurs throughout most of British Columbia at least to the north-central portion and occurs in adjacent northern Washington and Idaho. It is found in the foothills regions near our dry interior basins but is absent from open steppe. It has not been found in the driest parts of southern Oregon and Idaho.

This species is widespread in North America, especially in eastern hardwood forests. The range extends into northern California along the West Coast. It is found across the Canadian Prairie Provinces. Isolated records are shown for Colorado and Arizona on the Moth Photographers Group website, suggesting that is might occur uncommonly in the Rocky Mountains. Lithophane innominata is found from southern Canada to Tennessee and northern Georgia in the East.

This species is a foodplant generalist feeding on many hardwoods in the Betulaceae, Fagaceae, Rosaceae, and Salicaceae.  Larvae are partly carnivorous, and also feed on insects and other caterpillars.

This is one of the "winter moths," eclosing during the fall and spending the winter as an adult prior to mating and egg-laying in the spring. Fall-flying specimens have been found from late August until November in our region, and spring specimens have been collected from early March until the end of May. It is nocturnal and comes to lights and sugar baits.