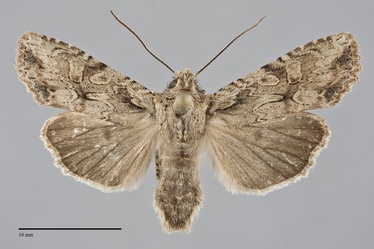 Lithophane disposita is a late fall and early spring-flying medium-sized moth (FW length 15–17 mm) that flies in the eastern part of the Northwest region. It has a mottled, light olive-gray forewing marked with a short black basal dash and a long claviform spot. The forewing margin is toothed. Its color is mottled light to medium-dark olive-gray, darkest near a black basal dash, at the median line, and at the outer margin. The terminal area is dark gray, divided into patches opposite the cell and above the anal angle by the light subterminal area. A rare form with a silvery white costa occurs in the East but has not been encountered in our area. The antemedial and postmedial lines are dark gray and black, double filled with the ground color. The antemedial line is zigzagged across the wing and is fused to the anterior and posterior limbs of the claviform spot giving the impression that the lines is elongated to the postmedial line in the fold. The median line is gray, evident as a shade between the costa and the orbicular and reniform spots and as an oblique line below the reniform spot. The postmedial line is weak except near the costa where it is strongly angled toward the outer margin and in the fold near the tip of the claviform spot. The subterminal line is the ground color, sinuous, extending to the outer margin on the mid-wing. It is preceded by a weak gray shade and small black wedges across the mid-wing. The terminal line is a series of black lines or wedges. The fringe is gray-brown. The orbicular and reniform spots are thinly outlined in black and are moderately large. The orbicular spot is oval, open toward the costa, and filled with the ground color and slightly dark gray centrally. The reniform spot is weakly hourglass-shaped, largest anteriorly, and is filled with the ground color and diffuse gray at the lower end. The claviform spot is long, black, sharply-defined with thicker apical portion. The hindwing is gray with darker discal spot, veins, and terminal line. The hindwing fringe is off-white with a gray base. The head and thorax match the ground color, with a thin transverse line across the distal collar and dark lateral tegulae. The head and thorax appear sculpted due to angular tufts arising from the head and anterior thorax. The male antenna is biserrate.

This moth can be identified by its late fall or early spring flight, its olive-gray color, and the black basal dash and long claviform spot that is open toward the wing base. The only other species which approaches it in appearance is Lithophane innominata, but it is light orange in color and has a short gray bar across the median area that is lacking in L. disposita.

This species occurs in moist forest and riparian habitats.  It is rarely collected in the Pacific Northwest.

Lithophane disposita has been collected in the Blue Mountains of southeastern Washington. It probably occurs further east in Idaho.

This moth is a predominantly eastern North American species. It occurs from southern Canada, Illinois, and Iowa to northern Georgia in the hardwood forest region. The range extends west to Alberta and the Pacific Northwest.

This species is known to feed on cherries (Prunus spp.) in the Rosaceae and willows (Salix spp.) in the Salicaceae.  Larvae may also be partly carnivorous, feeding on insects and other caterpillars.

Adults of L. disposita emerge from pupation in the late fall and overwinter before flying again in the spring. The few records from our region are from late September and April. It is nocturnal and comes to lights.