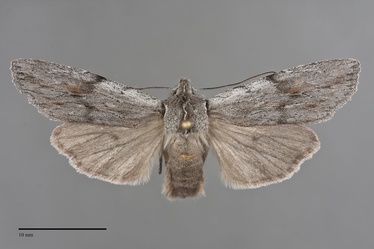 Lithophane boogeri is a streaky gray medium-sized moth (FW length 18–20 mm) that flies in association with western juniper (Juniperus occidentalis) in the dry interior of Oregon. The ground color is medium-dark gray, some specimens with slightly darker gray shading near the basal dash, in the median area, and in the terminal area opposite the cell and in the fold. A black basal dash is often present and a median dash or bar is a more constant mark. The transverse lines are jagged but obscure, blending with dark lines on the veins. A diffuse gray median line is evident in most specimens. Dark specimens have a terminal line consisting of ill-defined dark spots between the veins. The spots are faint. The orbicular spot is oblong and filled with the ground color. The reniform spot is figure-eight-shaped, mostly very faint and filled with the ground color, but the posterior part is pale-filled and drawn toward the base of the wing. The hindwing is medium brown-gray with a similar color fringe and darker gray smudgy discal spot and thin terminal line. The head and thorax are gray. The central thorax and edge of the collar are raised to form tufts. The male antenna is bead-like.

This species is a member of the Lithophane lemmeri species-group, all juniper or cedar-feeding moths. It can be recognized by its elongate wing-shape, the pale gray color, and the limited pattern dominated by the gray median bar. Lithophane boogeri is similar to Lithophane itata. It is darker gray and has a more prominent black median dash that L. boogeri lacks. These species do not occur together because L. itata is associated with Rocky Mountain juniper (Juniperus scopulorum) which grows in British Columbia, northern Washington, and in the Rocky Mountains. Lithophane boogeri is also similar Lithophane contenta and Lithophane fagina. The former species feeds on oaks, is more mottled, has partial black outlines of the orbicular and reniform spots, and a series of black wedges near the subterminal line that L. boogeri lacks. Lithophane fagina is a uniform gray species with a light whitish costa.

Larva is green with irregular mottled white subdorsal and lateral bands.  It is illustrated by Miller & Hammond (2003) under the name of Lithophane longior.

This species is common and widely distributed in dry juniper woodlands east of the Cascades at low to middle elevations.

Lithophane boogeri has been collected in the plateau region of central and eastern Oregon in the vicinity of Bend, Deschutes County east to northern Lake County and Union County. It is probably more widespread but is rarely collected due to its late fall and early spring flight season. A series of specimens from southeastern Idaho resemble this species but are probably best assigned to Lithophane subtilis. These Lithophane species are very closely related and might eventually be shown to be conspecific.

This species has only been collected in Oregon and Idaho but may occur in California and Nevada since its foodplant grows there.

This species is a foodplant specialist feeding on western juniper (Juniperus occidentalis in the Cupressaceae).  It may also be partly carnivorous, feeding on insects and other caterpillars.

This species has been collected in the early spring during March and April in Oregon. Like other Lithophane species it emerges in the fall and passes the winter as an adult prior to emerging again in the spring. It is nocturnal and comes to lights.