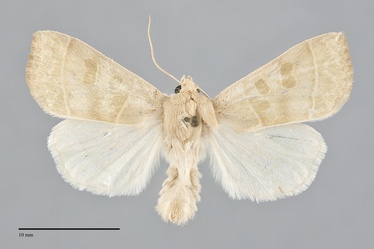 Ipimorpha viridipallida is an uncommonly collected medium-size moth (FW length 15–16 mm) that flies east of the Cascades during late summer. It has a broad, pale olive-yellow forewing with nearly straight pale lines and large spots. The wing has a slightly hooked tip and a squared-off outer margin. The color is smooth light yellow with an odd olive-green tint, minimally darker in the subterminal area. The basal line is barely visible. The antemedial and postmedial lines are slightly darker than the ground color adjacent to the median area and pale yellow outside of this area. Both lines are nearly straight, with a slant to the antemedial line and slight lateral convexity to the postmedial line. The median line is dark, faint. The subterminal line is pale yellow, irregular, complete across the wing. A series of faint spots between the veins forms the terminal line.  The fringe is concolorous with the terminal area. The large claviform, orbicular, and reniform spots are thinly outlined in pale yellow, and are filled with a slightly darker olive shade of the ground color. The orbicular and claviform spots are ovoid, similar in size. The reniform spot is kidney-shaped or hourglass-shaped. The hindwing and its fringe are white. The head and thorax match the forewing color, with a slight median ridge on the anterior thorax. The male antenna is filiform.

This species can be recognized by its pale greenish yellow forewing, straight lines and dark-filled large forewing spots, and white hindwing. It is much paler than the similarly patterned Ipimorpha pleonectusa which also occurs east of the Cascades. The most similar species is Ipimorpha nanaimo, but it occurs west of the mountains. It is darker orange in color and has a dark postmedial line on the dorsal hindwing that I. viridipallida lacks. Anathix aggressa is a small pale yellow moth with a similar wing-shape as I. viridipallida. It usually flies later in the fall and has a darker terminal area and darker hindwing than I. viridipallida.

This species occurs in mixed hardwood-conifer forests at higher elevations in the Blue Mountains, and in riparian habitats along creeks and rivers at low elevations. It is a rarely collected species.

Ipimorpha viridipallida has been found along rivers that run through the east slope of the Cascades near the Columbia Basin, and in the Blue Mountains of northeastern Oregon.

This species has been found in northern and central California to the south of the Pacific Northwest.

No information is presently available regarding larval foodplants of this species, but it probably feeds on Salicaceae such as black cottonwood (Populus trichocarpa) at low elevations and quaking aspen (P. tremuloides) at higher elevations based upon closely related species.

The flight period of this moth is summer, typically August. Specimens from our region have been collected as early as early July and as late as late September. It is nocturnal and comes to lights.