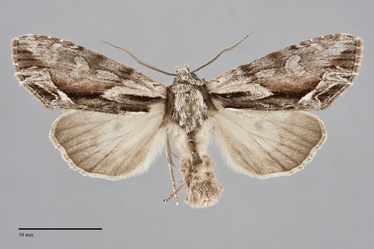 Hyppa contrasta is the brownest of three similar Hyppa species in our area with a male antenna that is intermediate in width compared to the others. It is a medium-sized moth (FW length 15–20 mm) that flies in low to mid-elevation forests during the summer. Its forewings are medium-gray anteriorly and darker gray and brown posteriorly. They have thick black basal and median dashes, and a black and white posterior postmedial line. The gray on the forewing is lightest basal to the antemedial line. The posterior part of the forewing is much darker gray proximal to the postmedial line, with slightly purplish dark red-brown on the mid-median area and tan and brown near the base. A few specimens have a dark median area to the costa. The subterminal area is light gray from M2 to the posterior margin except brown and black in the fold. The terminal area is dark gray or brown-gray with black on the veins, nearly black in the fold. Thick indistinct basal and median dashes are present, and the trailing margin is black and white basal to the antemedial line and black in the median area. The basal line is absent or a black dot on the costa. The antemedial line is dark gray, thick and indistinct, angled toward the outer margin and drawn sharply toward the base on the veins, very strongly on 1A+2A. The median line is a diffuse gray mark on the costa. The postmedial line is smoothly convex toward the outer margin, often concave lateral to the cell, pale and indistinct anterior to M3, strong with black medial and white lateral components on the posterior wing, usually widening to a white spot near the posterior margin. The subterminal line is absent anterior to M3, white posteriorly, with a sharp W-mark to the margin on veins M3 and CuA1. It is preceded by one or two black spike-like chevrons at the W-mark. The orbicular and reniform spots are variably outlined in gray to black, sometimes lacking an outline, filled with light gray. The orbicular spot is an elongate ellipse. The reniform is moderately large, kidney-shaped. A claviform spot is not evident separate from the black median bar. The hindwing is light yellowish gray, darker gray toward the margin, with faint discal spot, postmedial line, and veins. The hindwing fringe is white with a gray base. The head and thorax are light to medium-dark gray with a black transverse line across the mid-collar and black and dark brown lateral tegulae. The male antenna is moderately bipectinate.

This moth can be recognized as a Hyppa by the gray anterior and dark gray and brown posterior forewing with thick black basal and median dashes and a black and white posterior postmedial line that fades anteriorly. Hyppa males can be distinguished by the width of their antennae. That of H. contrasta is approximately 3x as wide as the shaft, narrower than that of Hyppa brunneicrista and wider than that of Hyppa indistincta. Females of these three species are less easily told apart. Hyppa contrasta is usually lighter than H. brunneicrista and lacks orange in the posterior subterminal area. Hyppa indistincta is more uniform gray over most of the anterior forewing than H. contrasta, has less distinct markings over most of the wing, and has a gap in the antemedial line between the costa and the fold, complete in H. contrasta.

This species demonstrates geographic variation in the Pacific Northwest. The populations from west of the Cascades are slightly larger and more vividly colored than those from further inland.

Hyppa contrasta is found from central British Columbia and Haida Gwai (Queen Charlotte Islands) south through the low and middle elevation forests of our region, including those west of the Cascade and Coast Ranges. This is the only one of our three Hyppa species that is commonly collected at low elevations.

This species is fairly widely distributed in North America. The range extends east from the Pacific Northwest to Newfoundland. It occurs south to Georgia in the Appalachian Mountains.

This species has been reared from velvetleaf blueberry (Vaccinium sp.) in the Ericaceae (McCabe 1990). It is probably a generalist feeding on both hardwoods and herbaceous vegetation like related species.

This species is single brooded and the adults fly during the summer. Most specimens from our area have been collected during June and July. It is nocturnal and comes to lights.