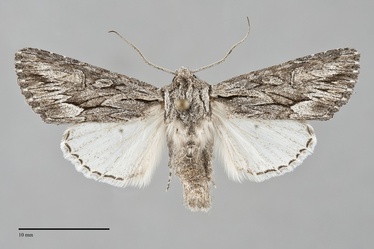 Fishia yosemitae is a medium-sized moth (FW length 15–19 mm) that flies east of the Cascades during the fall. It has a streaky gray forewing with black basal and median dashes and sawtooth lines. The outer margin is scalloped with a saw-tooth terminal area. It is even medium-dark gray, lighter bluish gray in the subterminal are opposite the cell and in the fold and darker gray with black veins in the terminal area. The basal dash is long, and the median dash is fused to a strongly angled black and white segment of the adjacent postmedial line. The basal line is barely evident. The antemedial and postmedial lines are thin, gray, partially double filled with light gray, strongly zigzagged. These lines approach each other in the fold, narrowing the median area at the black bar. The median line is dark gray, very faint and diffuse. The anterior postmedial line is weak, and the angled segment in the fold is prominently black and white as noted above. The subterminal line is light gray and white, strongly serrate and forms white chevrons on the mid-forewing that are preceded by long black spikes in the mid-subterminal area. The terminal line is a series of black lines across the mid-forewing. The fringe is gray with light spots and lines at the ends of the veins. The orbicular and reniform spots are partially outlined by thin black lines. The orbicular spot is an elongate oval filled with light gray and a central darker line. The reniform spot is poorly-defined except medially and is filled with variable light gray peripherally, strongest and most consistently medially, and the ground color elsewhere. The black claviform spot is fused to the median bar. The hindwing is white in males and dark gray in females, with dark gray discal spot, veins, and terminal line. The hindwing fringe is white with a darker base in both sexes. The head and thorax are gray with black lines across the collar and along the edges of the tegulae. The male antenna is biserrate.

This moth can be identified by its medium-gray color lacking brown tints, the basal and median dashes, and streaky wing pattern with sawtooth postmedial and subterminal lines. It is similar to several other species in the tribe Xylenini. Andropolia diversilineata is less streaky and lacks a median dash. Sutyna privata has a much smoother subterminal line.

This species is geographically variable across North America. It is pale throughout the West but becomes darker along the east slope of the Rocky Mountains. Boreal populations from the East are very dark brown-black on the forewing. These forms were considered to be different species until recently (Pohl et al. 2010).

Two synonyms of this species were described from the Pacific Northwest. The type locality of Hadena tortilis Grote is Washington Territory. Fishia exhilarata Smith was described from Washington, Pullman.

This species is widely distributed in dry open habitats. In the Pacific Northwest it is common in open ponderosa pine forests, juniper woodlands, and sagebrush steppe at low to middle elevations. This species is considered to be management sensitive and benefits from thinning and burning that maintains an open pine forest or rangeland community.

Fishia yosemitae is widespread east of the Coast and Cascade Ranges as far north as south-central British Columbia. It occurs in the southeastern part of the province. It is widespread in the Columbia Basin and in southern Oregon but has not been collected in southern Idaho.

This species is found throughout most of the American West. It occurs from central Alberta to Colorado in the Rocky Mountain and Great Plains regions. It is found in eastern, central, and southern California as well as in the Intermountain region.

This species is a generalist feeding on many kinds of herbaceous vegetation, including plants in the families Asteraceae and Scrophulariaceae, and buckwheats (Eriogonum spp.) in the Polygonaceae.  A study by the U.S. Forest Service of the wild peony (Paeonia brownii) in the Paeoniaceae observed massive defoliation of this herb during a local outbreak of  F. yosemitae.

Fishia yosemitae flies during the fall. Records from the Pacific Northwest span mid-September to early November. This moth is nocturnal and comes to lights.