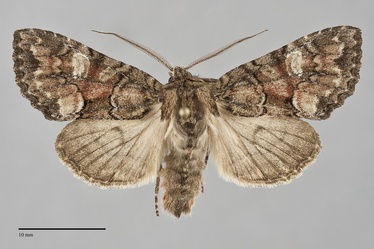 Fishia illocata is a moderate-sized moth (FW length 16–19 mm) that flies in forests during early fall. It has gray-brown and dark red forewings with a large white reniform spot and black median dash, and a wide male antenna. The forewing is relatively broad with a slightly scalloped outer margin. The color is mottled gray-brown to dark brown, with variable wine-red suffusion that is strongest in the mid-median and medial subterminal areas. The subterminal area is usually paler and the terminal area darker gray lateral to the cell and in the fold. A short weak basal dash is present. A thick black bar extends across the median area in the fold. The veins on the distal wing are brown. The basal, antemedial, and postmedial lines are gray and black, double, darkest abutting the median area, filled gray-tan to reddish brown. The basal line is irregular close to the base. The antemedial line is slanted slightly toward the outer margin or weakly excurved with apex in the fold, slightly toothed toward the base on the veins. The median line is dark gray, narrow and faint, strongest across the costa. The postmedial line is scalloped, most strongly lateral to the reniform spot where the teeth radiate from the reniform spot; the line anterior to the spot is drawn sharply toward the base on the costa and is concave toward the base below the spot. The subterminal line is light tan, patchy and diffuse, irregular without a W-mark. It is preceded by a gray dark shade on the costa and weak shade on the mid-forewing. The terminal line is a series of black triangles that accentuate the scalloped appearance of the margin. The fringe is dark gray-brown. The orbicular and reniform spots are weakly outlined in light to dark gray. The orbicular spot is round or a tilted upright oval, filled with the brown ground color or a lighter shade of it. The reniform spot is large, oval or broadly kidney-shaped, filled with the ground color medially, off-white laterally, and darker gray-brown interiorly. The claviform spot is weak, absent or a dark smudge at the base of the median bar. The hindwing is gray-brown, darker toward the outer margin, with darker gray-brown discal spot, postmedial lines, and terminal line. The hindwing fringe is similar to the ground color with a median dark line. The head and thorax dark gray-brown, sometimes reddish or nearly black, with a black transverse bar across the distal collar and darker posterior tegulae. The male antenna is broadly bipectinate.

This species can be recognized by its broad wing-shape, brown and red forewing with a large white reniform spot and black median bar (or dash). Males are also distinctive due to their wide antennae. It is unlikely to be confused with other moths. Dryotype opina, a species that flies west of the Cascades during the fall, could potentially be confused with F. illocata in this part of the Northwest. It is slightly smaller, has a darker brown forewing, and has a smaller reniform spot with much less pale filling than that of F. illocata.

The larva is smooth, orange-tan to gray-green with thin, obscure pale subdorsal and lateral lines.  It is illustrated by Miller & Hammond (2003) under the name Oligia illocata.

Fishia illocata is widespread in moist forests in the Northwest. It occurs west of the Cascades as far north as Vancouver Island, including on the immediate coast. It is found in southern British Columbia at least as far north as the central interior of the Province, and in adjoining northeastern Washington and northern Idaho. It also flies in the Blue Mountains of southeastern Washington.

This species is widespread in North America. It does not occur south of Oregon along the West Coast, but ranges east through the Canadian Prairie Provinces to Nova Scotia. It occurs south to New Jersey along the Atlantic Coast and northern Georgia in the Appalachian Mountains. It also occurs in Colorado and northern New Mexico, but it is not clear whether this is by direct extension across the Great Plains, a disjunct population, or by extension south through the Rocky Mountains.

This species is a foodplant generalist feeding on many kinds of hardwoods such as alders (Alnus spp.) and birches (Betula spp.) in the Betulaceae, and willows (Salix spp.) in the Salicaceae.  In coastal rainforests, it is particularly common on red alder (A. rubra), rhododendron (Rhododendron macrophyllum), and red huckleberry (Vaccinium parvifolium) in the Ericaceae.

The flight season of F. illocata begins in late August and lasts through September. It is a nocturnal moth that comes to lights.