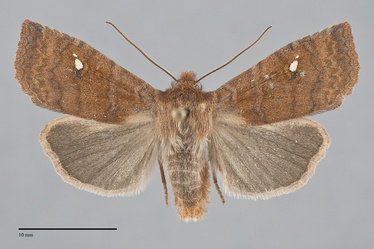 Eupsilia tristigmata is a small to medium-sized moth (FW length 14–16 mm) that flies in forests during the late fall and early spring. It has bright orange-brown forewings with a reniform spot comprised of three dots; two of them are white or yellow-orange, and the most inferior one is purplish-gray. The forewing is short with a pointed, sometimes slightly hooked, apex and a scalloped outer margin. The color is bright reddish orange-brown in fresh specimens fading to dull orange-brown in worn spring specimens. Purple-gray mottling is present near the antemedial and postmedial lines outside of the median area, on the distal costa, and near the veins in the terminal area. The basal, antemedial, and postmedial lines are red-brown to purplish brown, double and filled with the ground color or purplish gray; the components abutting the median area stronger and more complete than those outside of this area. The basal line is slightly irregular. The antemedial line is transversely oriented or slightly angled toward the base, slightly waved. The median line is dark orange-brown, sinuous, bent at the posterior reniform spot. The postmedial line is toothed on the veins except for short concave segments opposite the cell and in the fold, the ends of the teeth or purple in vivid specimens. The subterminal line is light orange, slightly irregular and nearly parallel to the outer margin, preceded by a dark orange-brown shade across the entire wing. The terminal line is thin, dark orange-brown. The fringe is the ground color. The orbicular spot is a small circle, faint or absent, orange-brown filled with the ground. The reniform spot is white or yellow-orange, a central upright oval flanked anteriorly and posteriorly by smaller spots and a purple-gray  smudge at the lower end. The claviform spot is small, faint or absent, dark orange-brown. The hindwing is medium-dark gray except lighter yellow-tan or red-tan along the anterior margin and on the fringe. The discal spot is darker gray. The head and thorax are uniformly of the forewing ground color with a median crest on the anterior thorax. The male antenna is weakly biserrate.

This moth can be identified by its bright to dull orange brown color and the white to orange reniform spot with small "satellite" spots at the anterior and posterior ends. It is unlikely to be confused with other species in our area.

This species demonstrates geographic variation in our area. Specimens from the western part of the range are vividly colored, strongly-patterned, and usually have orange-filled reniform spots. Those from east of the mountains are duller and browner with less purple-gray color, less mottling on the distal forewing, and tend to have white in the reniform spot. The male genitalia of these forms are identical.

This species is common and widely distributed in moist forests throughout much of North America.  In the Pacific Northwest, it is particularly abundant in coastal rainforests and mixed hardwood forests at low elevations west of the Cascades.  East of the Cascades, it occurs in mixed hardwood-conifer forests and riparian zones along creeks and rivers in the Rocky Mountain region. It is uncommon in the forest-steppe ecotone in the Cascade foothills.

Eupsilia tristigmata is found in forests throughout much of the Northwest region, at least as far north as central British Columbia. It is commonly found in the western parts of the region as far north as Vancouver Island. It is also common in southern British Columbia, the Idaho Panhandle, and in the Blue Mountains. It has not been found further south in the Rocky Mountains nor in the Basin and Range region.

The range of this moth includes northern California and Alberta in the West. It is more widespread in the East where it occurs from southern Canada to Illinois, northern Georgia, and South Carolina.

This species is a foodplant generalist feeding on many kinds of hardwoods, particularly Aceraceae, Rosaceae, Betulaceae, and Fagaceae. It has been reared from red huckleberry (Vaccinium parviflorum) in the Ericaceae.

The adults of this "winter moth" emerge from the pupa in the fall and overwinter prior to mating. They fly again in the spring when most specimens have been collected. Naturally occurring specimens have been found from late August to November and again from late February until early May. They are nocturnal and come to lights but have also been taken at sugar baits on both sides of the Cascades in Washington.