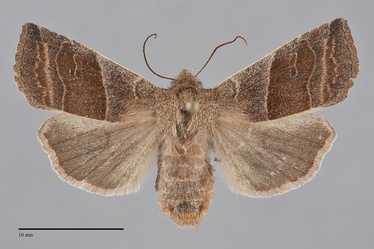 Eupsilia devia is a small to medium-sized moth (FW length 14–16 mm) that flies in boreal forests in British Columbia during the fall and early spring. It has alternating gray-brown and brown areas on the forewing, separated by smooth, pale lines. The relatively short forewing has a squared-off apex that is slightly falcate in some specimens. The ground color is brown in the basal, median, and distal subterminal areas. The other parts of the wing are powdery gray-brown. An unusual straight pale line that is slightly angled toward the base separates these colors in the distal subterminal area. The ordinary lines are similar color and brown. The basal line is strongly excurved. The antemedial line is straight, parallel to the similar line in the distal subterminal area described above. The postmedial line is weakly S-shaped, convex outward on the anterior wing and concave toward the base on the posterior half. The subterminal line is pale, irregular. No median or terminal lines are evident. The fringe is brown. The reniform spot is narrow, upright, and weakly hourglass-shaped or kidney-shaped, outlined in pale and filled with the ground color or slightly darker gray-brown. The orbicular and reniform spots are absent. The hindwing is medium-dark brownish gray with a dark thin terminal line and slightly paler fringe. The head and thorax are uniform brown to gray-brown. A pointed crest is present on the anterior thorax. The male antenna is biserrate.

This species can be identified by its brown and gray-brown forewing with pale lines. The "extra" line in the distal subterminal area is unique to this moth and Eupsilia fringata, a species that occurs to the south of its range. Eupsilia devia is smaller than E. fringata and lacks a red form that exists in that species but is closely similar otherwise.

This species is widely distributed across Canada and the eastern United States in moist forest habitats, extending to mixed hardwood-conifer forests in the northern Rocky Mountain region.

Eupsilia devia has been found in central and southeastern British Columbia. It is replaced by E. fringata further south.

This species is found predominantly in eastern North America where it occurs from southern Canada to the Ohio River Valley, and slightly further south in the Appalachian Mountains. The range extends west to the boreal parts of Alberta and reaches its western limit in British Columbia.

This species mostly feeds on asters (Aster spp.) and goldenrod (Solidago spp.) in the Asteraceae, but is also known to feed on cherries (Prunus spp.) in the Rosaceae.

The adults of E. devia eclose in the fall and enter hibernation without much activity. They re-emerge in the spring to mate and lay eggs. Most of the specimens from our area have been collected from late February to mid-April. This species is nocturnal and comes to lights.