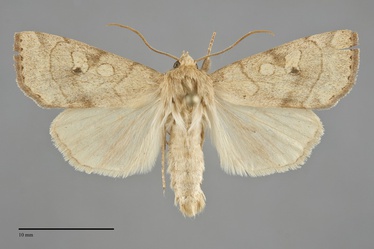 Enargia infumata is a variably colored, gray-ochre, gray-orange, to dull gray-brown moth (FW length 16–20 mm) that flies in forests during the summer. It has smooth brown forewing lines, pale-filled spots with gray in the lower reniform spot, and a light ochre hindwing. The forewing has a straight outer margin except at the anal angle. The color is variable grayish shade of ochre or orange-brown, including ochre, gray-ochre, dull gray-orange, gray-tan, and grayish rust-brown. Variable strength and distribution powdery dark gray to gray-brown shading is often present on the distal wing, most commonly in the median area distal to the median line, the anterior or entire subterminal area, and terminal area except at the apex. The basal, antemedial, and postmedial lines are brown or gray-brown, smooth, often vague. The basal line is limited to the costa. The antemedial line is strongly arched across the wing, often with a bend in the fold and a slight concave anterior segment through the cell. The median line is usually prominent, diffuse gray to gray-brown, interrupted by the lower reniform spots and bent 90° below it. The postmedial line has a short perpendicular segment at the costa and is weakly excurved across the width of the wing with slight bends bends near M1 and M3. The subterminal line is light yellow to orange, undulating, variable in prominence from vague to prominent. It is preceded and followed by darker gray shading in the subterminal and terminal area. The terminal line is a series of small to moderate-sized gray spots. The fringe is the ground color or darker gray. The orbicular and reniform spots are outlined by the same color as the transverse lines but are usually thinner than the lines and often incomplete, filled with the ground color. The orbicular spot is a large circle or oval. The reniform spot is broad, kidney-shaped or weakly hourglass-shaped, with a dark gray spot in the lower end. There is no claviform spot. The hindwing and its fringe are light ochre, with variable light gray suffusion that forms a weak postmedial line and submarginal shade that fade anteriorly; the terminal line is weak or absent. The head and thorax are the forewing ground color. The male antenna is beaded.

This moth and Enargia fausta can be identified by their yellowish to orange color and light-filled forewing spots with a dark gray mark in the lower reniform spot. Both species are similar to Enargia decolor, but it lacks the gray mark in the reniform spot. Enargia infumata can usually be distinguished from E. fausta by the grayer and duller forewing and hindwing color and less distinct outlines of the forewing spots in E. infumata, brighter yellow or orange color with sharply-demarcated spots in E. fausta. Structural and DNA differences exist between these species. The male and female genitalia are described and illustrated in Schmidt (2010), which is available as a free download.

This species flies in mid-elevation to high elevation forests with quaking aspen in the Rocky Mountain region.  Along the east slope of the Cascades, it occurs in low to middle elevation riparian forests along creeks and rivers with mixed groves of cottonwood and aspen.

Enargia infumata is widely distributed in our region. It occurs in the central and southern part of British Columbia, including west of the Cascade Range. The distribution appears to continue south through Washington and Oregon, although the identity of specimens in this area is still in need of confirmation by dissection.

This species is widely distributed in boreal and montane North America. It is found from Alaska to New Brunswick and New York across the northern part of the Continent. The range extends south to California and to Arizona through the Rocky Mountains.

The early stages are poorly known due to historical confusion with the species now known as E. fausta. It probably feeds on shrubs and trees in the families Betulaceae and Salicaceae, likely favoring aspen (Populus tremuloides) which is a confirmed foodplant (Schmidt 2010).

This moth is on the wing during the summer, usually during late July and August. It is nocturnal and comes to lights.