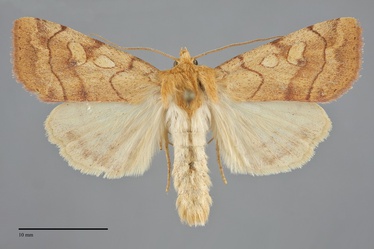 Enargia fausta is a yellow to orange moth (FW length 16–20 mm) that flies in boreal forests during the summer. It has smooth brown forewing lines, complete outlines of the forewing spots, gray in the lower reniform spot, and a light yellow hindwing. The forewing has a straight outer margin, except at the anal angle. The color is variable, usually a mixture of bright yellow and light orange without gray or brown shading. The basal, antemedial, and postmedial lines are red-brown or dark orange, smooth. The basal line is nearly straight across the costa. The antemedial line is strongly laterally convex across the wing with apex in the fold, usually with a slight inward bend in the cell. The median line is diffuse red-brown or slightly gray, interrupted by the lower reniform spots and bent 90° below it. The postmedial line is slightly undulating, a short segment perpendicular to the costa, and then weakly arched across the rest of the wing with slight bends near M1 and M3. The subterminal line is light yellow, wide and undulating, preceded by the orange shades in the anterior and posterior subterminal area and followed by similar color in the mid-terminal area. The terminal line is variable, absent or a series of red-brown spots. The fringe is the ground color, often reddish. The orbicular spot are both outlined by the same color as the lines and are filled with the ground color. The orbicular spot is a large circle or oval and the reniform spot is a broad, kidney-shaped or weakly hourglass-shaped with a dark gray spot in the lower end. There is no claviform spot. The hindwing and its fringe are light yellow, with variable reddish suffusion along the inner and outer margins, a weak postmedial line that fades anteriorly, and a thin dark terminal line. The head and thorax are the ground color. The male antenna is bead-like.

This species can be recognized by its yellow or orange color, relatively simple pattern of smooth lines and spots, and the gray spot in the lower reniform spot. The spot distinguishes E. fausta from Enargia decolor, but not from Enargia infumata. Enargia infumata is more widespread than E. fausta in the Pacific Northwest. It is usually grayer or browner than E. fausta, has less well-defined forewing lines and outlines of the spots, and more suffusion on the dorsal hindwing. These species differ structurally in the shapes of cornuti of the male vesicae and in the size and shape of the female corpora bursae. These species are illustrated in the recent Enargia revision, which can be downloaded at no cost (Schmidt 2010).

Schmidt (2010) notes the superficial resemblance of Pacific Northwest populations to the Eurasian species Enargia paleacea, noting that these taxa can only be distinguished by DNA and not by structural characters. In our opinion it seems more likely that E. fausta occurs  naturally in our region given the widespread distribution and preference for natural habitats. This issue might be resolved by DNA sequencing.

This species has a more narrow habitat preference and distribution than the other species in the genus. It prefers boreal forests with birches in northern regions across Canada, but is mostly restricted to riparian cottonwood forests at low elevations along the east slope of the Cascades and in the Willamette Valley of western Oregon.

The range of Enargia fausta in the Pacific Northwest is poorly understood at present due to confusion with Enargia infumata. Specimens with a phenotype consistent with E. fausta are known from southwestern British Columbia, northwestern Washington, and the Willamette Valley of western Oregon (see discussion regarding the relationship of these specimens to the Eurasian E. paleacea in the Identification section, above). Similar moths are known from the southwestern part of interior British Columbia and the east slope of the Cascades in Washington.

The range of this species is less extensive than that of E. decolor. It occurs in the boreal zone across the Continent, but does not range south in the Rocky Mountains according to Schmidt (2010).

This species is a foodplant specialist feeding on trees in the birch and willow families (Betulaceae and Salicaceae, respectively). Reared specimens with vouchers have been found on paper birch (Betula papyrifera) and aspen (Populus tremuloides). Schmidt (2010) suspects that the favored foodplant is birches.  However west of the Cascades in Oregon, the suspected foodplant is black cottonwood (Populus trichocarpa) based on the habitat.

The flight season of E. fausta is the summer, usually from late June to mid-August. This is about a month earlier than that of E. decolor. The adults are nocturnal and come to lights.