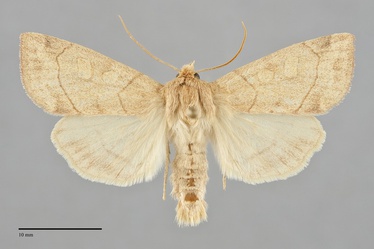 Enargia decolor is a medium-sized to large, yellow to orange-brown moth (FW length 17–22 mm) that flies near aspens or cottonwoods during late summer and fall. It has thin brown forewing lines and immaculate light yellow filling of the spots. The forewing is relatively broad with a square apex and a straight outer margin except near the anal angle. It is light ochre-yellow variably tinted with orange-brown and sprinkled with dark scales. Variable red-brown to gray shading is present in the anterior and posterior subterminal area and medial terminal area. The basal, antemedial, and postmedial lines are red-brown, smooth. The basal line is nearly straight. The antemedial line is bent 90° in the fold, often with a slight concave segment in the cell. The median line is diffuse, orange, red-brown, or gray, interrupted by the lower reniform spot and bent 90° below it, strongest near the spot and posterior margin. The postmedial line is smooth or slightly undulating, perpendicular to the costa then widely arched to the posterior margin. The subterminal line is the ground color, diffuse, undulating, preceded and followed by similar darker gray shades. The terminal line is variable, red-brown spots or lines or absent. The fringe is of the ground color, sometimes slightly pink. The orbicular spot is a large oval and the reniform spot is broad, weakly kidney-shaped or hourglass-shaped. Both spots are filled entirely with the pale ground color. There is no claviform spot. The hindwing is light yellow with variable red-brown suffusion along the inner and outer margins. A diffuse red-brown postmedial line fades anteriorly, and there is a thin dark terminal line at the base of the light yellow fringe. The head and thorax the ground color. The male antenna is bead-like.

This species is variable in color and the amount of shading on both wings, but can usually be recognized by its relatively large size, light yellow to orange color, and large forewing spots with pale yellow filling. It is most likely to be confused with Enargia fausta and Enargia infumata. Both of these species differ from E. decolor in having a gray spot in the inferior reniform spot. Both species usually fly about a month earlier in the season than E. decolor.

This species is widely distributed throughout much of North America in moist forest and riparian habitats.  In the Pacific Northwest, it is found in riparian habitats along creeks and streams with cottonwoods, but is particularly common to abundant in quaking aspen forests along the east slope of the Cascades, in the Rocky Mountain region, and in the higher mountains of the Great Basin such as the Steens Mountains at middle to high elevations.

Enargia decolor occurs along the periphery of the Columbia Basin in eastern Washington and northern Oregon. It is also found in the Steens Mountains of southeastern Oregon. The range extends north to north-central British Columbia. It occurs less frequently west of the Cascades where it appears to be limited to the vicinity of the Gulf of Georgia in Washington.

This species has a wide range in North America, occurring from Coast to Coast. The eastern range is relatively narrow near the Canada-United States border. The western range is more extensive, extending from northern Alberta south to Colorado, northern Arizona, and south-central California.

This species is a foodplant specialist feeding on cottonwoods (Populus spp.), but particularly favors quaking aspen (P. tremuloides) in the Salicaceae.  During epidemic outbreaks, this species may defoliate vast forests of quaking aspen in the Rocky Mountain region.

This species flies in late summer and the fall. Most records from our region are from August and September. It is nocturnal and comes to lights.