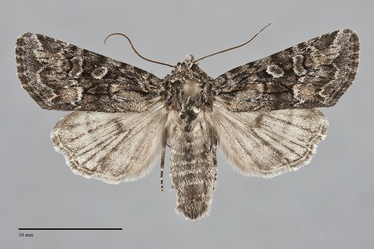 Aseptis characta is a small, mottled gray moth (FW length 13–15 mm; Wingspan: 32.0 ± 1.2 mm (n = 25; range 29.5 – 35 mm)) that flies in dry habitats during the summer. It has a busy pattern of lines and spots, including pale-rimmed orbicular and reniform spots and a large claviform spot, and a notch in the outer margin of the hindwing. The forewing is slightly pointed, mottled ash gray with variable tan or olive tint that is strongest in the distal median area. The wing base, subterminal area opposite the cell and in the fold, and the apex are lightest. Although variable, the costa and distal mid-portion of the subterminal area and the subapical part of the terminal area are often darker gray. A black basal dash is usually distinct, sometimes widened or forked distally. The basal and antemedial lines are gray, partially double and filled with slightly lighter gray than the adjacent wing. The antemedial line is often absent on the mid-wing, toothed on the veins and transverse in orientation when present. The median line is dark gray, diffuse, faint except on the costa. The postmedial line is toothed, usually with dark lines on the veins at the tips of the teeth, smoothly curved around the reniform spot and nearly perpendicular to the posterior margin or angled slightly toward the base below the spot. The subterminal line is pale gray or slightly yellow, moderately sinuous, variably preceded by a gray shade and/or indistinct gray wedges except opposite the cell. A series of black spots comprises the terminal line. The fringe is checkered gray. The orbicular and reniform spot outlines are black lined with whitish gray, filled centrally with the ground color. The orbicular spot is a slanted oval, sometimes fused to the reniform spot. The reniform spot is variable, faint to distinct, figure-eight or kidney-shaped. The claviform spot is large, spanning the median area, apically pointed. The hindwing is light gray with smoky darker veins that appear to radiate from the base, with dark discal spot and terminal line. The hindwing fringe is two-toned light gray. The head and thorax are gray with hoary dark edging on the collar and edges of the tegulae. The male antenna is beaded.

This is the last smallest and most narrow-winged Aseptis in the Pacific Northwest. It is similar to several distantly-related moths, but can usually be recognized by the mottled gray forewing with tan or olive tints, pale-rimmed black spots, large claviform spot, and the characteristic "Aseptis" notch in the lateral margin of the hindwing. It is most likely to be confused with Lacinipolia pensilis in the tribe Eriopygini. It usually has a smaller claviform spot and lacks the hindwing notch. Like other members of its tribe it has fine hairs on the surface of the eyes. Several summer-flying Euxoa species, especially the variable species Euxoa tessellata, resemble A. characta. It has a smaller claviform spot and less toothed postmedial line than A. characta, and its hindwing is paler at the base and lacks the notch. Euxoa plagigera has a more elongate orbicular spot and streakier distal wing than A. characta, and also lacks the notch in the hindwing.

Aseptis characta is geographically, appearing slightly different in each region.  A number of names are available for those wishing to recognize subspecies; however, the variation appears to be clinal and is therefore best considered as regional forms. "Form" erica (Smith) (Utah) is paler gray with a smoky hindwing, "form" luteocinerea (Smith) Colorado, Montana, and Utah) is more tan, and "form" pluraloides (McDunnough) (Montana, Wyoming) is brown with a dark hindwing.

This species is widely distributed throughout much of western North America in dry rangelands and forests.  In the Pacific Northwest, it is common to abundant in open, dry juniper woodlands at middle elevations and on sagebrush steppe at low elevations east of the Cascades. It occurs to mid-elevations in the mountains.

Aseptis characta is widespread east of the Cascade summits in our region, occurring as far north as south-central British Columbia. It is found across the southern parts of Oregon and Idaho.

This species occurs from the western Great Plains to the Pacific Northwest and California. It has been collected in southern Alberta, western Saskatchewan to central Colorado at the eastern limit of its range. It is found through the Intermountain region to eastern and southern California.

The flight period of this moth depends on altitude. It has been collected from mid-May to early July, earliest in low-elevation desert habitats and latest at higher elevations. Adults fly at night and come to lights.