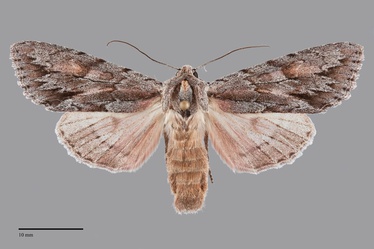 Andropolia theodori is a variable large moth (FW length 21–26 mm) that flies in dry forests during the summer; very pale populations with whitish-gray forewings and white hindwings fly in southern Oregon. The most common form has bark-like gray forewings with rusty reniform spot and a jagged dark terminal area that traverses the postmedial line, and copper-colored hindwings. The forewing outer margin is weakly scalloped. It is powdery medium-dark gray, with sooty dark gray in the fold near vein 1A+2A. Rusty red-brown is present through the cell, as a streak through the fold, and variably in the terminal area. The terminal area is dark brown-gray, darkening to black at the subterminal line. The jagged subterminal line which defines the medial terminal area is jagged, extending medial to the postmedial line on M2 and in the fold and extending to the outer margin as a W-mark on M3 and CuA1. The basal, antemedial, and postmedial lines are black bordered by slightly lighter gray than the ground color. The basal line is oblique on the costa. The antemedial line is zigzagged, angled toward the outer margin. The median line is black, strongly angled from the costa through the posterior reniform spot and curved toward the base on the posterior wing, strong on the costa and usually weak elsewhere. The postmedial line is evenly zigzagged, widely and smoothly curved across the distal wing and angled toward the base posterior to CuA2. The subterminal line is jaggedly irregular as described above. The terminal line is a series of black triangles. The fringe is gray, variably checkered with dark gray or black. The orbicular and reniform spots are variably outlined by black or gray lines. The orbicular spot is oval filled with the ground color or rusty brown. The reniform spot is moderately large, kidney-shaped, black inferiorly and poorly-defined elsewhere, filled with rust-brown. The claviform spot is black, small and thin, often open at the tip, filled with the ground color, rust-brown, or pale rust. The hindwing is reddish copper with gray veins, discal spot, and postmedial and terminal lines. The hindwing fringe is slightly paler copper with a darker base. The head and thorax are gray with a weak black transverse across the median collar in some specimens, dark edges on the tegulae, and a rusty central spot. Pale specimens from desert areas in southern Oregon are pale bluish gray with powdery darker scales, black lines and medial terminal area, and rust in the reniform spot on the forewing and have nearly white hindwings. The male antenna is strongly bipectinate.

The common form of this species can be recognized by its large size, gray color with rusty tints, rust-filled reniform, copper hindwing with gray lines. The pale form could potentially be confused with Andropolia diversilineata, but A. theodori is larger, much paler, and has more prominent red-brown in the reniform spot. Males of A. diversilineata have a wide bipectinate antenna.

This species is geographically variable. Darker gray and pale whitish forms are found in the Northwest, as described above. Other light gray and mottled reddish forms exist in California.

Larva is smooth, dark reddish brown with small white dots and a black scalloped sublateral line.  It is illustrated by Miller & Hammond (2009).

This species is found in forests throughout the Northwest as far north as the Coast Range of southwestern British Columbia. It is common along the east slope of the Cascades as well as in other forests near the Columbia Basin. It is also widespread in eastern Oregon. It also occurs west of the Cascades in Oregon, but is more restricted to the rain shadow near the Gulf of Georgia in western Washington and southwestern British Columbia.

This species is found in extreme southwestern Alberta near British Columbia. It is more widespread south of our region throughout California, in the Intermountain region, and in the southern Rocky Mountains.

This species is a foodplant generalist feeding on many hardwoods including oceanspray (Holodiscus spp.) and cherries (Prunus spp.) in the Rosaceae, snowbrush (Ceanothus spp.) in the Rhamnaceae, and willows (Salix spp.) in the Salicaceae.

The flight period of A. theodori is the summer, beginning in mid-June and lasting to mid-September in the Northwest. It is nocturnal and comes to lights.