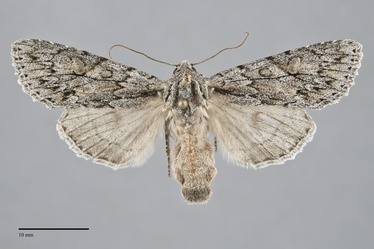 Andropolia aedon is a medium-sized to large moth (FW length 19–23 mm) that is widespread in forests during the summer. It has powdery gray forewings with prominently toothed lines, a series of black arrowhead-like marks demarcating the subterminal line, and black-rimmed spots with subtle olive-brown filling. The forewing outer margin is weakly scalloped. It is even light bluish gray, heavily and evenly powdered with black scales. The fold and terminal area are suffused with ill-defined olive-brown; the medial terminal area is black adjacent to the jagged subterminal line producing a series of arrowhead or chevron-shaped marks distal to the postmedial line. A black basal dash is present, often extending along 1A+2A. The cubital vein is black, thickest distally. The basal and antemedial lines are black, zigzagged. The antmedial line is angled slightly toward the outer margin. The is black and brown, strongly angled from the costa to the reniform and weak on the posterior wing. The postmedial line is black, evenly toothed, drawn sharply toward the base on the costa, widely arched toward the outer margin and angled toward the base on the distal wing nearly parallel to the outer margin. The subterminal line is jaggedly irregular, forming the black chevrons described above. The terminal line is a series of large black triangles. The fringe is weakly checkered light gray. The orbicular, reniform, and claviform spots are black, filled with the ground color and olive-brown. The orbicular spot is a small oval. The reniform spot is kidney-shaped, open toward the outer margin. The claviform spot is long and thin. The hindwing is yellowish off-white with light gray suffusion, and darker gray veins, discal spot, postmedial line, and a dark terminal line. The hindwing fringe is white with a dusting of gray. The head and thorax are gray with gray lines near the margins of the tegulae and a light olive-brown central thorax. The male antenna is weakly biserrate.

This moth can be recognized by its relatively large size with long forewings, even gray color strongly peppered with black and shaded with subtle brown along the lines and in the spots, and the distinctive black chevrons along the course of the subterminal line. It is most similar to Andropolia contacta, a boreal forest and Rocky Mountain region moth that is flies in aspen forests. It is duller gray than A. aedon without blue tint or brown patches, the dark gray in the subterminal area tends to be more continuous than in A. aedon, and the hindwing postmedial line is often clearly scalloped. The ranges of these species are only likely to overlap in southern British Columbia and northern Idaho.

The larva is smooth, mottled light brown, gray, and green with small white dots and a black scalloped sublateral line.  It is illustrated by Miller & Hammond (2003).

This species is widely distributed in moist forests throughout the Pacific Northwest.  It is particularly common west of the Cascades in oak woodlands, mixed hardwood forests, mixed hardwood-conifer forests, and coastal rainforests at low to high elevations.  It also occurs in open ponderosa pine forests east of the Cascades at middle elevations, particularly in riparian zones along creeks and rivers.

Andropolia aedon is widespread in forests from the Cascade Mountains to the Pacific Coast as far north as Vancouver Island. Its range extends east to the Idaho Panhandle through southern British Columbia and northern Washington. It is also found in the Blue Mountains in southeastern Washington.

The range extends south to central California, both along the coast and in the Sierra Nevada.

This species is a foodplant generalist feeding on many hardwoods in the families Aceraceae, Betulaceae, and Rosaceae.  It is particularly common on alders (Alnus spp.)

The flight period of A. aedon is late summer, with records from late June until early September in the Northwest. It is nocturnal and comes to lights.