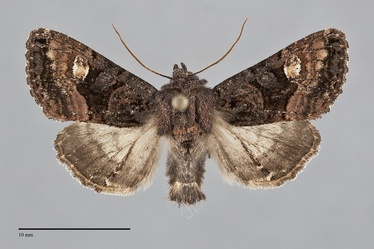 Euplexia benesimilis is a distinctive, dark brow,n small to medium-sized noctuid moth (FW length 13 - 15 mm) that files in forests throughout most of the Pacific Northwest during the summer. It has a large, light yellowish reniform spot and pale purple brown subterminal area. The forewing is somewhat triangular in shape and has a slightly scalloped outer margin. The ground color is blackish brown in the median and terminal wing and lighter purplish brown medial to the antemedial line and in the subterminal area. The color is lightest lateral to the postmedial line, especially lateral to the reniform spot. The antemedial and postmedial lines are triple, but only the part abutting the medial area is dark black, and filled with pale mauve. The antemedial line is smooth, forming a laterally convex curve across most of the wing. The postmedial line is drawn sharply toward the base at the costa, is scalloped lateral to the cell, and is smoothly concave and obliquely oriented toward the base caudal to the reniform spot. The median line is absent. The subterminal line is pale and slightly irregular, forming a weak W-mark toward the outer margin on veins M3 and CuA1. It is preceded by a black-brown shade that is similar to the color of the terminal area. The orbicular spot has a black outer and mauve inner component and is filled with the ground color. The large reniform spot is bounded by a black line but is mostly filled with pale yellow-white with a mauve center. The small black claviform is difficult to see against the dark background. The hindwing is pale gray with a slight yellow tint, with much darker gray marginal band, discal spot, and postmedial line. The marginal band contains a pale line near the anal angle. The fringe is pale with a gray inner line. The head and thorax are dark brown. The male antenna is beaded.

The wings of this species are pleated when the moth is resting with the wings folded back, a unique feature of the tribe Phlogophorini.

This species can be recognized by the combination of wing shape, dark brown median area with large light yellow reniform spot, and reddish purple subterminal space. It is unlikely to be confused with other species in our area.

This species is widely distributed throughout much of North America in moist forest habitats.  In the Pacific Northwest, it is common in coastal rainforests of the Coast Range and along the west slope of the Cascades, but also occurs in drier mixed hardwood forests and oak woodlands at low elevations west of the Cascades.  It is usually uncommon to rare in the Rocky Mountain region.

Euplexia benesimilis is in forests throughout the Pacific Northwest at least as far north as north-central British Columbia. It has been most commonly collected in western Oregon and Washington as well as in southern Canada and northeastern Washington near the international border. Although there are not many records from Idaho this species is likely to occur widely north of the Snake River Plain.

Euplexia benesimilis is widely distributed in North America. The range extends south through the western parts of California to the central part of the state. It occurs south to Colorado in the Rocky Mountains. In the East it is found from the island of Newfoundland in the north to Tennessee and western North Carolina in the south.

This species is a very broad generalist feeding on all types of herbaceous vegetation, ferns, hardwood shrubs and trees, and on conifers.

Euplexia benesimilis is predominantly found during the summer in the Pacific Northwest and is probably single-brooded in our area. Two broods have been reported from other areas (Powell & Opler 2009). Our records are from mid-May to mid-July, although a few records from later in the year suggest the possibility of a partial second brood. This species is nocturnal and comes to lights.