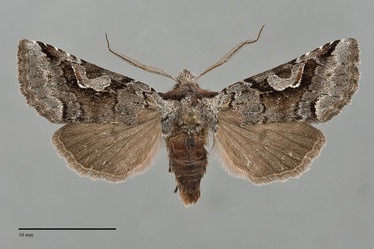 Stretchia pictipennis is a medium-sized moth (FW length 16 mm) that flies in southwestern Oregon during the spring. It has a gray forewing with a brown median area and fused orbicular and reniform spots with red or yellow color in the lateral reniform spot. The forewing has a pointed apex and slightly scalloped outer margin. The ground color is medium gray, slightly lighter gray near the subterminal line. Warm dark brown is present on the mid- and anterior median area and on the costa in the subterminal area. Thick black spots are located adjacent to the subterminal line at the costa and trailing margin, the anterior spot is oblique and the posterior spot is concave toward the base. The basal, antemedial, and postmedial lines are black and light gray, with the black component of the latter two lines abutting the median area. The basal line is abruptly bent toward the base at the costa. The antemedial line is slightly irregular, slightly convex toward the outer margin and angled lateral from the costa. The median line is faint diffuse gray to dark brown, evident on the posterior wing. The postmedial line is weakly scalloped with lines along the veins at the tips of the teeth, abruptly drawn toward the base on the costa and nearly straight elsewhere, strongly angled toward the base with a slight outward curve near the posterior margin. The subterminal line is pale gray, faint, sinuous with a weak W-mark on veins M3 and CuA1, preceded by black marks on the wing margins as described above. The fringe is concolorous with the terminal area without a significant terminal line. The orbicular and reniform spots are broadly fuse into an eye-glass-like mark, black outside and white inside, filled with the gray ground color and red, brown, and luteous scales laterally. The orbicular spot is ovoid and the reniform spot is bar-like, angled toward the outer margin anteriorly. The claviform spot is absent. The hindwing is brown-gray, including the fringe, with slightly darker discal spot and veins. The head is gray. The collar is red-brown with a dark brown edge. The rest of the thorax is gray. The male antenna is widely bipectinate.

This species can be identified by the gray forewing with a warm brown median area with fused spots, black spots at the ends of the subterminal line, and red-brown collar. It is most similar to Stretchia plusiiformis, a widespread species east of the Cascades. This species has a gray median area and lacks a red-brown collar. The black mark adjacent to the subterminal line at the posterior margin in S. pictipennis is usually a thin gray line that tapers anteriorly in S. plusiiformis. Habitat

This species occurs in oak woodlands at low elevations and in mixed hardwood-conifer forests at high elevations in the Siskiyou Mountains.

The Pacific Northwest distribution of this moth is limited to the Siskiyou Mountains of southwestern Oregon.

The range of S. pictipennis extends south through California where it is most commonly collected in the Sierra Nevada.

No information is presently available regarding larval foodplants of this species, but it is probably a specialist feeding on currants (Ribes spp.) in the Grossulariaceae based upon closely related species.

The flight period of S. pictipennis is spring. It has been collected from late March through May in our region. This species is nocturnal and comes to lights.